PHUKET: Police investigating the taxi drivers involved in the incident at Ratsada Pier last Friday (Sept 2), which saw four tourists forced to disembark one van to use another taxi, have now come to the understanding that the incident was the result of yet another misunderstanding. 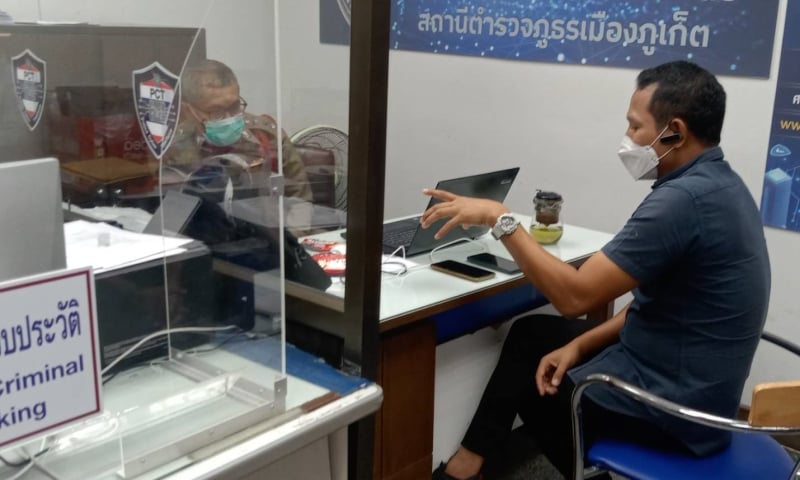 Following questioning of the two drivers involved in the incident, Pol Col Pichetpong Jangklaikom, Chief of the Tourist Police Region 3 branch, based in Phuket, said that both drivers were in the right.

The van driver who picked up the tourists, Chatrapon Misinpanitanon, 45, had every right to pick up the tourists at the entrance to the pier, Col Pichetpong said.

The tourists had booked Mr Chatrapon as their taxi driver through an app, he confirmed.

Meanwhile, police had also deemed that Ekachai Decha, 37, the man who physically stopped the van from departing the pier with the four tourists, as also “in the right”, as Mr Ekachai worked for “Ratsada VIP”, a taxi services company that had signed a concession with ferry operator Seatran.

The concession allowed Ratsada VIP to provide taxi services to Seatran passengers disembarking at the pier. Mr Ekachai was of the understanding that meant Ratsada VIP had exclusive rights to all passengers exiting the pier area.

“The concession is fully legal and allowed under the regulations of the Land Transport Office,” he said.

Officers had yet to track down the tourists themselves for their description of the events that transpired, Col Pichetpong added.

Col Pichetpong said that police were continuing their investigation, and that legal action may yet be taken against either or both of the taxi drivers.

Adcha Buachan of the Phuket Land Transport Office (PLTO) confirmed yesterday that Mr Chatrapon may yet face legal action for calling the taxi operators at Ratsada Pier a “mafia”.

Of note, much of the action taken by officials in response to the incident on Friday has been in response to how often the word “mafia” has been used to describe and criticise Phuket taxi drivers who operate under “concession” agreements or otherwise focibly control access to paying passengers.

Mr Adcha of the PLTO has assured that following this latest incident taxi drivers from 40 taxi ranks, or “queues”, across Phuket will be brought in again to have the regulations explained to them, Col Pichetpong said.

Tourist Police and Phuket Provincial Police will be present for the talks, he added.

Col Pichetpong expressed that he understood the situation Phuket taxi drivers were in, with little to no work over the past two years.

However, he pointed out that now that tourists were returning, their behaviour was on show for the world to see, especially in the age of social media.

“We must be careful because of the use of social media. If there is an incident, there will be an effect,” he said.

The Phuket News was told that the tourists were quoted “about B400” to be taken from Ratsada Pier on the east side of the island to Patong, on the west coast.

It has yet to be publicly confirmed how much the tourists were required to pay by using the Ratsada VIP taxi they were forced to take instead.