PHUKET: National Police Commissioner Lt Gen Suwat Chaengyodsuk was in Phuket today (Sept 11) to officiate the unveiling of a memorial to commemorate 103 officers of the Region 8 Police who have died in the line of duty. 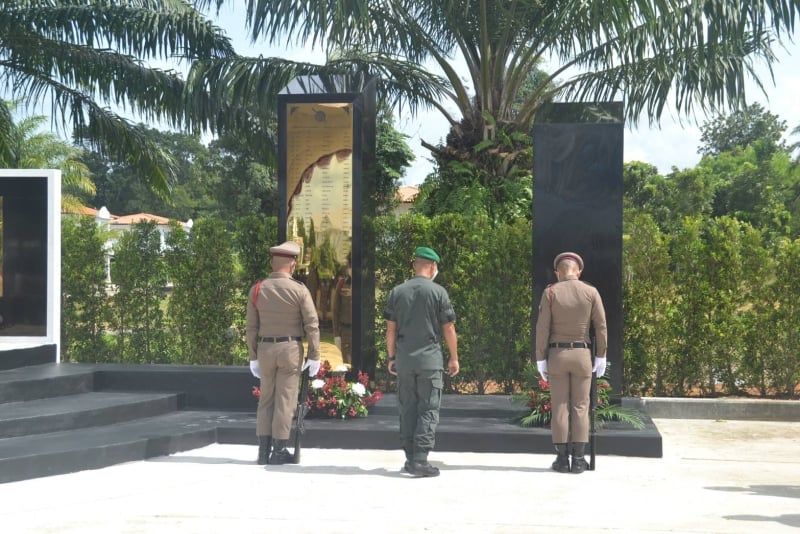 The event today coincides with the 28th anniversary of the formation of Region 8 Police, which oversees all police operations in the seven Upper Southern Thailand provinces of Phuket, Phang Nga, Krabi, Ranong, Surat Thani, Chumphon and Nakhon Si Thammarat.

Region 8 Police for nearly 22 years were originally based in Surat Thani, but moved to their new headquarters at Tha Chatchai at the northern end of the island in 2015. The new base of operations, covering 185 rai, was built at a cost of B169 million.

As part of the official opening of the memorial today, Lt Gen Suwat laid wreaths to remember the 103 officers of the Region 8 Police who lost their lives while on duty.

Also present for today’s officiating was Lt Gen Surachate Hakparn, along with Region 8 Police Commander Amphol Buarabporn and a host of other top-ranking local police officers, their wives and other members from locals groups and the local community.

“It’s hard to find anyone to compare to as such good role models than police officers,” he said.

Lt Gen Suwat also read a prayer to commemorate “the merits of those who served with dedication and sacrifice of personal happiness for the well-being of the people even at the cost of their own lives”.

“Your goodness will be etched in our hearts forever. May the souls of all heroes rest in peace in the world," Lt Gen Suwat said.