THAILAND: Police will issue warrants for the arrest of two suspects who threw a bomb at anti-government demonstrators outside a shopping mall on Rama IV Road on Saturday (Jan 16), a senior police officer at the Metropolitan Police Bureau (MPB) said. 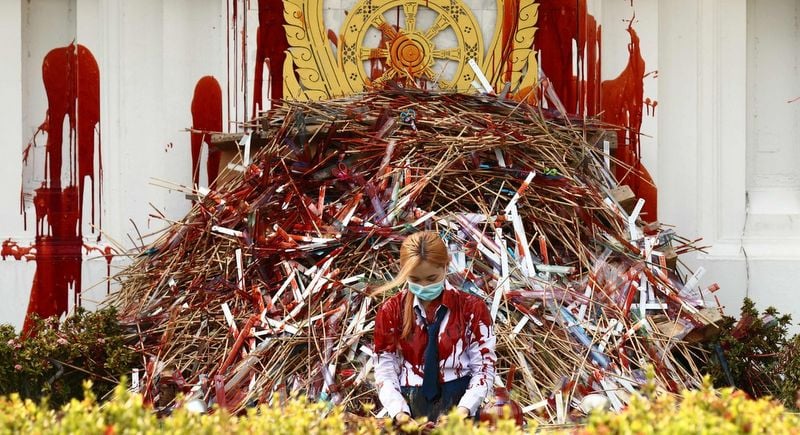 A protester kneels in front of a heap of stationery and bamboo canes during a “Bad Student” demonstration outside the Ministry of Education in Bangkok on Saturday. Photo: AFP.

Pol Maj Gen Piya Tawichai, deputy commissioner of the MPB, said an initial check found two suspects riding on a motorcycle on the Thai-Japanese Bridge threw a ping-pong bomb down on a group of anti-government demonstrators outside Chamchuri Square.

Four people suffered minor injuries in the explosion, not long after demonstrators started leaving nearby Samyan Mitrtown, where they had rallied after being dispersed from Victory Monument.

The blast happened hours after members of the Free Guards group gathered at Victory Monument to demand the release of two of their members who were arrested earlier.

The bomb was similar to the one used at a previous rally at Ratchayothin intersection. This type of bomb is also commonly used during fights between rival vocational college students, Pol Maj Gen Piya said.

Also on Saturday, activists clashed with police near Victory Monument after they invited people to write on three 112m-long blank banners about how they feel about the government’s performance and the lese majeste law.

Dozens of people calling themselves the Free Guards staged the activity at the Phaya Thai island near the monument just before noon. Several passers-by reportedly took up the offer and wrote on the banners.

But shortly after, police reached the scene, backed by a fully equipped mob-control team who encircled the outer area and moved in.

Among messages to the government were: ‘Thai education needs to be improved”, “Stop harassing people”, “A failed government, a divisive society” and “COVID-19 is an excuse”.

Police warned them the activity was in violation of the COVID-19 emergency decree, with penalties up to two years in prison and/or a fine of up to B40,000.

It also breached the Disease Control Act with one year in jail and a fine of up to B100,000, they said.

Meanwhile, the Bad Students group of pro-democracy students seeking education reform held a demonstration to mark Teachers’ Day, gathering in front of the Education Ministry on Ratchadamnoen Avenue. Five were arrested by police before being released.

Panusaya Sithijirawattanakul, a protest co-leader of the anti-government Ratsadon group wrote on Facebook yesterday that the rally at Samyan had nothing to do with the group.