CHON BURI: Police have given more details of Wednesday’s raid on a luxury house at a golf course in Bang Lamung district during which two policemen were shot by a man using a 9mm automatic pistol. The cordoned-off house at the centre of Wednesday’s shooting of two police officers at a golf course in Bang Lamung district, near Pattaya. Photo: Chaiyot Pupattanapong / Bangkok Post 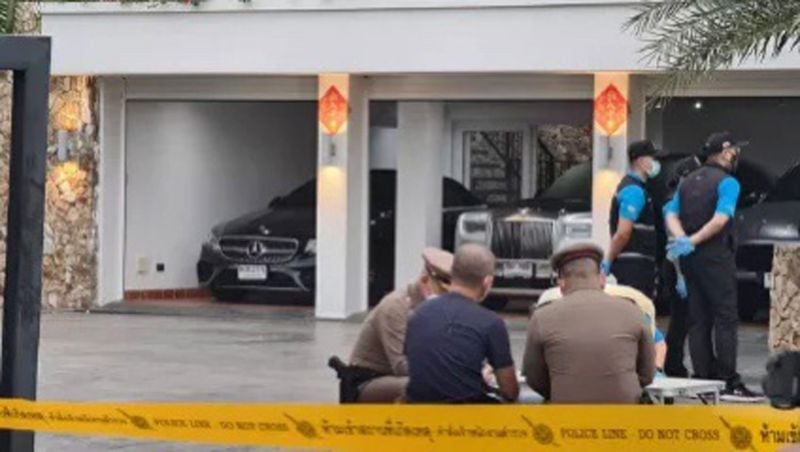 Police inspect the house and three luxury cars, at a golf course in Chon Buri, following the shooting on Wednesday. Photo: Supplied by Wassayos Ngamkham via Bangkok Post The gun used by one of the suspects in the shooting at a house at the Phoenix golf course in tambon Huay Yai of Bang Lamung on Wednesday. Photo: Chaiyot Pupattanapong / Bangkok Post

Deputy national police chief Pol Gen Suchart Theerasawat said police had followed proper procedure and showed a search warrant at the door, but a foreign tenant fled to the upper floors and opened fire at them.

The man was later arrested.

The accused shooter’s lawyer said on Friday his client ran a real estate firm and was not involved in any illicit business.

Pol Gen Suchart said the suspect was Yang Zhang, 35, a citizen of Saint Kitts and Nevis, earlier identified in media reports as a Chinese national.

St. Kitts and Nevis, a dual-island nation in the Caribbean Sea, has a citizenship-by-investment program touted as "the most successful of its kind globally".

Pol Gen Suchart said other people living at the house, foreigners and a Thai man, were also detained.

All would be investigated, particularly the foreigners, to find out whether they posed a threat to national security under the Immigration Act. If they were in breach of the law they would be deported.

Pol Gen Suchart was speaking after a meeting with police investigators at Huay Yai police station in Chon Buri on Thursday evening.

Police had seized two guns. One had been hidden by a friend of the suspect and the other was a modified 9mm. Other items seized included bullet-proof vests that ordinary citizens were not allowed to possess, said Pol Gen Suchart.

Computers and documents were also seized as evidence and would be examined by officials from the Anti-Money Laundering Office.

The deputy national police said police had followed proper procedures. They produced a search warrant before entering the premises.

The suspect fled to a bedroom on the third floor of the house. When police followed, the suspect opened fire from inside the room, wounding two officers. He also used tear gas, Pol Gen Suchart said.

He said 60-70 spent cartridges were found scattered at the scene, mostly inside the suspect’s bedroom.

Police had initially pressed three counts against Mr Zhang – attempted murder, resisting officers by use of a weapon, and illegal possession of firearms and ammunition.

The suspect’s lawyer, Anirut Khongsap, said his client had run a real estate business for two to three years. To his knowledge, his client was not involved in drugs or any other illicit business.

He said news coverage of the incident suggested it was very violent, and he wondered whether police had followed proper procedures and exactly what had sparked the shooting.

He said the house was purchased and operated like a firm. His client may have become fearful when strangers entered the house. The officers were wearing plain clothes.

He understood that the gun his client possessed was registered.

He had not been able to speak to his client yet but had spoken to the other people in the house at the time. They were all shocked by the events, he said.

A highly-placed source said later that during questioning the suspect confessed to shooting, but he claimed he did not know they were police officers. He thought they might be people trying to attack or abduct him for ransom.