MMA: American brawler Dustin Poirier overpowered Conor McGregor in Las Vegas (Saturday, July 10, US Pacific time), winning their lightweight UFC trilogy fight by a TKO when the Irishman appeared to snap his left leg in the opening round. 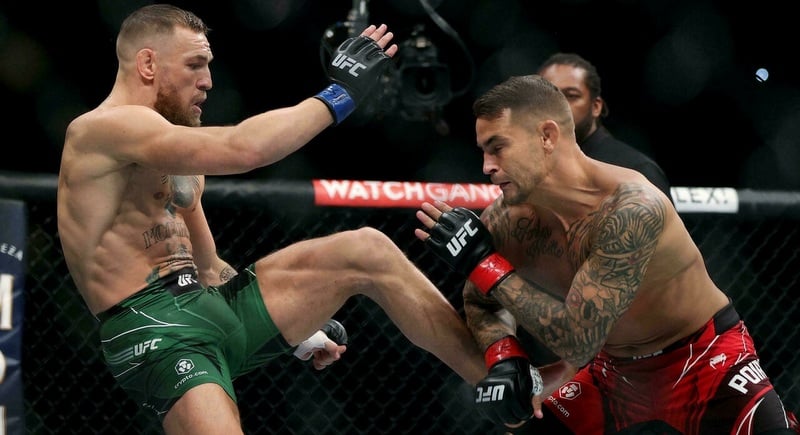 The fight was officially ruled as a “doctor’s stoppage” at the end of the first round after a bloodied McGregor swung and missed a punch then stumbled backwards, his leg grotesquely buckling under him on the edge of the octagon.

Poirier then pounced on a helpless McGregor, raining down a series of punches and elbows until McGregor was saved from the knockout by the bell in front of the capacity crowd at the T-Mobile arena.

The rubber match was expected to settle the score and complete the trilogy between the former two-weight UFC champ McGregor and his longtime rival Poirier, who now looks set to get a shot at an undisputed title and establish himself as one of the sport’s superstars.

There was plenty of bad blood between the two in the lead up to their third fight. In 2014 McGregor knocked out Poirier in under two minutes and Poirier returned the favor in January, demolishing McGregor with a second round KO.

It was the first time a capacity crowd has attended a UFC fight in Nevada since the COVID-19 pandemic. With the United States lifting restrictions across the country, fans are returning to sporting events.

The first round started with both fighters exchanging kicks and blows with Poirier getting the better shots in and it didn’t take long for McGregor to start bleeding from the mouth.

Poirier landed a vicious left had, a few more long kicks and then they went to the ground for about two minutes of grappling. Poirier let McGregor get up and they both threw a punch at the same time but missed and that’s when McGregor’s leg snapped.

Poirier improved to 28-6 while McGregor, who has just one win in over four and a half years, dropped to 22-6.