THAILAND: Prime Minister Prayut Chan-o-cha defended the Defence Ministry’s share of the budget for the upcoming fiscal year during the first reading of the bill in parliament yesterday (May 31), after opposition MPs slammed the figure as unusually high when compared to allocations for health care. 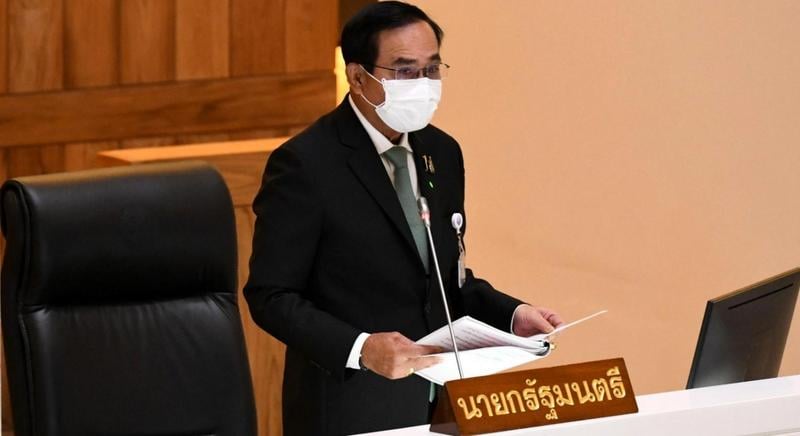 Prime Minister Prayut Chan-o-cha presents the B3.1-trillion budget for the 2022 fiscal year to the Lower House yesterday (May 31). Photo: Parliament.

Before the reading began, Gen Prayut said the B3.1-trillion budget agreed last year will be crucial to the implementation of various measures and policies to mitigate the impact of the COVID-19 pandemic.

He told parliament that Thailand’s economy is expected to grow by 2.5-3.5% this year, as the global economy begins to recover.

That said, Gen Prayut said this year’s growth could still be affected by a resurgence of the virus both in Thailand and abroad, which will dent the recovery of the tourism sector, along with drought and volatilities in the global financial system.

“There are limitations and risks that could affect Thailand’s economic recovery in 2021,” Gen Prayut told the House of Representatives, which continues the first reading tomorrow.

“There are still uncertainties over the COVID-19 situation both at home and overseas, and [the pandemic] may be more severe and longer than expected,” he said.

The budget proposes spending of around B3.1trn next year, down about 5.7% from this year.

The difference is due to lower revenues from tax collection, projected to be B2.4trn, or down by 10.26% from the previous year, according to the premier. Next year, the Thai economy will expand by 4-5%, he said.

On the national COVID-19 vaccine rollout, he said the government will proceed according to its plan.

“Every vaccine must be imported with the government-to-government method. We have a committee working on this,” he said.

“As for the budget of the Defence Ministry, if you look at it carefully, you will see that most of the budget will be spent on salaries, funding core missions and developing the armed forces,” he said.

He insisted the defence budget isn’t too high, arguing that it had been cut by B10 billion each year in the past two years.

“So it is not correct to say that the Defence Ministry’s budget is higher than that of the Public Health Ministry,” he said.

He said besides the Public Health Ministry’s budget, there is also the budget of three health funds worth B141.74bn. As a result, the total health care budget is B295.7bn, just B5.9bn lower than this fiscal year.

Pheu Thai secretary-general and MP for Nakhon Ratchasima, Prasert Chanthararuangthong, said the budget doesn’t reflect the nature and urgency of the country’s problems.

Sompong Amornvivat, Pheu Thai leader and MP for Chiang Mai, said he could not allow the budget bill to be passed by parliament due to the government’s slow and untimely response to the pandemic.

“People are suffering from COVID-19... but I don’t see any clear plans or strategies on how to handle that,” he said.

Move Forward list MP Wiroj Lakkhanaadisorn said the government had set aside B45bn from its B1trn loan for public health, but only B7.1bn of the budget had been disbursed since the start of the pandemic in Thailand.

On the government’s spending on COVID-19, Mr Wiroj said the cheapest solution to the pandemic is vaccination but the government was slow to inoculate people, allowing the disease to spread quickly.