PHUKET: Plans to build a bridge costing B1.2 billion linking Phuket with Koh Maphrao, also just called “Coconut Island”, are gaining momentum with Phuket Governor Norraphat Plodthong expected to inspect the island today (Dec 22) to assess whether or not to pledge his support for the project. Mr Teeradech points to where the proposed bridge will be built – if it is approved. Photo: Tanyaluk Sakoot 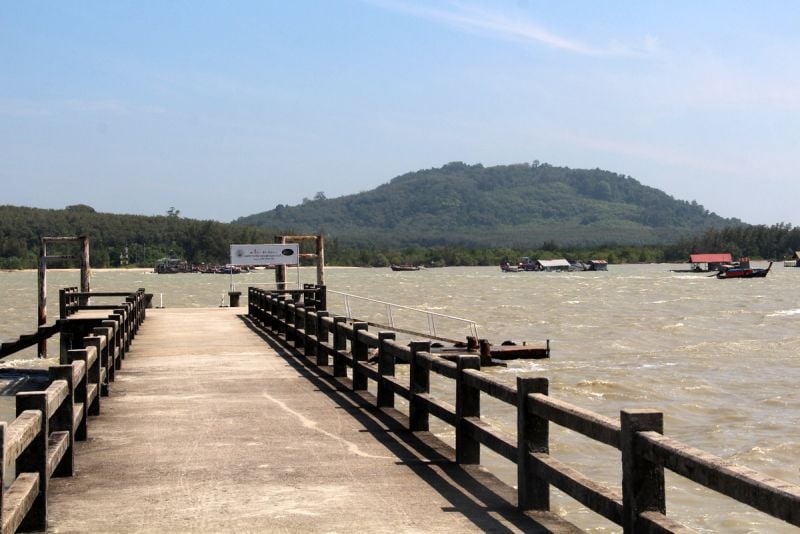 The pier at Laem Hin reaches out to Koh Maphrao, just a kilometre away. Photo: Tanyaluk Sakoot

The proposed bridge is to span about one kilometre from Laem Hin, popular for its seafood restaurants served by the local fishing community on Phuket’s east coast, to the pier at Baan Koh Maphrao on the island.

The move to push ahead with a fresh proposal to build the bridge, which has failed to gain approval in several previous attempts in the years past, comes from strong support from the villagers on the island itself, reports Teeradech Kumleang, Deputy Chief of the Phuket office Department of Rural Roads (DRR), which under the Ministry of Transport oversees the national Bureau of Bridge Construction.

“I arrived in Phuket about six months ago and I received complaints from villagers on the island saying they deeply wanted a bridge to Phuket,” Mr Teeradech explained.

“They even sent a petition of about 100 signatures asking for a bridge, so I dispatched a team to survey the residents on the island to better gauge public opinion on whether or not a majority actually wanted it,” he added.

The response was strong.

“We definitely support having a bridge. We want it,” said Sangsan Piersakul, the resident Imam on Koh Maphrao, where a huge majority of the islanders are Muslim.

“The officials came over to survey residents’ opinions last month. Most of the people here, there are about 1,000 people living on the island, supported having a bridge connecting us to Phuket,” he said.

“Currently, we have to travel by boat between the islands. This is made even harder when the wind is strong and storms hit the area.

“Having a bridge is necessary for our people, to make it easier – and sometimes just possible – for them to travel to make a living, for healthcare, studying, working and especially in emergencies, which is a priority,” he added.

“I would like Phuket Governor Norraphat to support this project,” Mr Teeradech told The Phuket News.

“If the Governor agrees, then next this project will be handed to the Tourism Strategy staff at Provincial Hall.

“We will also invite other officials, such as from the Phuket Marine Office, the Department of Marine and Coastal Resources (DMCR) and the national parks, for their input. We have to bring all our ideas together.

“Also, if we get the Governor’s approval, we can then apply for the first part of the budget required to conduct the Environmental Impact Assessment (EIA) and even start the process to request the construction budget from the DRR in Bangkok.”

In his proposal to Gov Norraphat last week, Mr Teeradech confirmed that his office would prefer to build a suspension bridge. He also estimated such a bridge to cost about B1.2 billion.

“We have no idea yet how many lanes the bridge will have or other details. At this stage we are still looking at ideas,” Mr Teeradech explained.

“However, a suspension bridge is the suitable choice. It would have less effect on the environment and would be attractive. After the EIA has been done, we will know what the bridge design will look like,” he said.

Mr Teeradech also conceded the work that lays ahead in bringing the project to fruition.

“This project has a long way to go. We must understand that is sensitive to environmental NGOs here and we have yet to conduct the EIA, of which a very important part is explaining to people what the bridge will involve,” he said.

Mr Teeradech admitted the building of the bridge and the supporting roads infrastructure will affect mangroves in the area – and hence the project by law will need express permission from the Cabinet before it can proceed.

“Just like the Thepsrisin Bridge at Saphan Hin. We must be very careful with our plans and considerate of the natural environment we will be disturbing, but in the end I believe the project will be well worth it,” he said.

Regardless, Mr Teeradech remains confident the bridge – sooner or later – will be built.

“It is a good chance for Koh Maphrao, which is a part of Phuket that has yet to be developed,” he said.

“This bridge is worth building because of it will improve local people’s general well being and their standard of living simply by providing better transportation between Phuket and Koh Maphrao.”