PHUKET: The driver of a pick-up truck that lost control and crashed into an electric pole on the Phuket Bypass Road early this morning (Feb 20) has been confirmed dead. 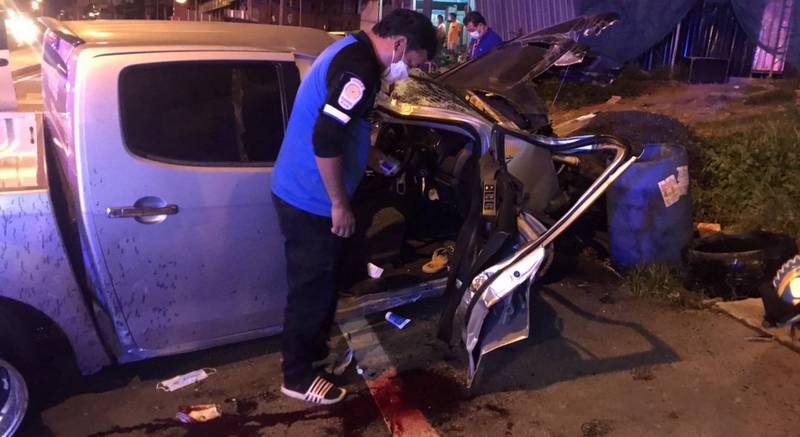 The incident occurred around 12:30am this morning when officers from the Incident Notification Center responded to a 191 call and were joined by volunteers from the Thepkasattri Point Kusoldharm Foundation at the scene opposite the Shell gas station on the north bound section of the Bypass Road in Ratsada Subdistrict.

On arrival at the scene they discovered a silver four-door Isuzu pick-up truck, Phuket registration number Kor-9062, badly damaged at the side of the road; the front of the vehicle had been pratically demolished and there was significant damage all along the right side of the truck.

It appeared that the truck had lost control, veered onto the central road divider and hit an electric street light and a road traffic sign, both of which incurred serious damage.

Inside the vehicle were two men - the passenger, who was badly injured, and the driver who appeared unconscious without a pulse and who was stuck in the truck.

An ambulance from Vachira Phuket Hospital was called and rescue workers used hydraulic equipment to recover the driver’s body.

Emergency CPR was then administered to the stricken driver before he was taken to Vachira Hospital for further treatment. However, medical officials confirmed he later died at the hospital.

The injured man was also taken to Vachira Hospital for treatment and will be questioned by police at a later stage to determine the exact cause of the incident. Police confirmed they will also use local CCTV footage in their investigation efforts.