MMA: The sport of MMA is about making the most of your opportunities, whenever they present themselves. Fabricio Andrade will be looking to run up the championship ladder, after being gifted a chance to fight one of the most experienced fighters in Asian MMA. 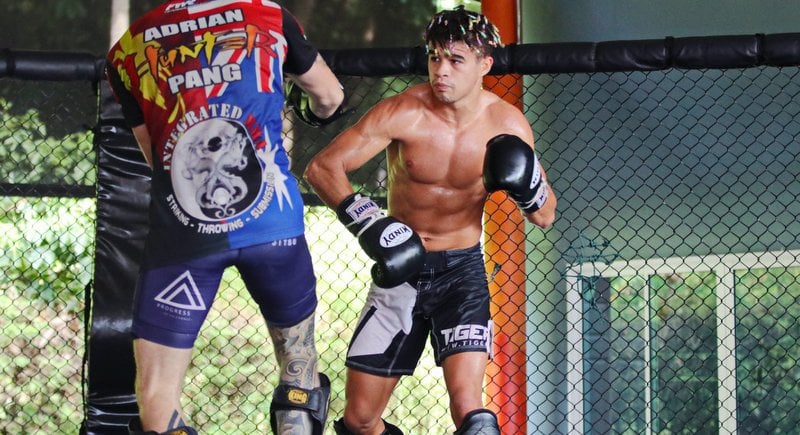 The Brazilian known as ‘Wonderboy’ fights out of Tiger Muay Thai and MMA Training Camp in Chalong and is unranked in ONE Championship, Asia’s premier mixed martial arts promotion. He only made his debut for the promotion last July with an impressive first round submission win over Filipino Mark Abelardo.

For his second fight in the promotion, and with the worldwide pandemic still raging, Andrade thought he would be offered another comparable opponent. After all, he’s unranked in the promotion’s crowded Bantamweight division (61kg) and isn’t a household name at the moment.

But when he was tapped to fight Shoko Sato, the number two ranked Bantamweight in the division with over 50 fights, Andrade was positively taken aback.

“I was surprised they offered me the fight, but I was more surprised that he accepted,”said the 23-year-old Phuket resident. “He’s number two, and I’m unranked so it was not a good fight for him. I already knew he’s going to be tough. But I’m ready.”

The contest, part of ONE Championship: Unbreakable 3 at the Singapore Indoor Stadium, actually took place and was recorded last Friday (Jan 23). However, the results are unknown and the athletes have been sworn to secrecy until the fights air live next Friday (Feb 5).

The COVID-19 pandemic has forced the promotion to hold multiple fight cards in one night which will then be broadcast on YouTube and television on scheduled Friday timeslots.

“[Sato is] very experienced,” Andrade said, “I don’t think he wants to strike with me. I’d have to defend the take down and make him pay every time he tried or took me down.”

The promotion guaranteed a title shot to Sato if he won, while Andrade was not given the same guarantee. Still, he’s ecstatic to be handed an opportunity to showcase his skills against one of the best in the division, and a win over the number two ranked fighter in the division will significantly increase his chances of a title shot in the near future.

At the moment, he’s looking to turn heads in ONE Championship and has his sights set on some of the promotion’s top names.

“If I win this fight, I would try to fight John Lineker next,” he said, referring to fellow Brazilian and UFC veteran Lineker.

While the pandemic has affected travel and tourism, especially here in Phuket, it has allowed Andrade to focus on improving his wrestling, and become a more well-rounded fighter.

“For us, I think we haven’t been affected so badly like Japan or those countries, because we’re not really in lockdown during fight camp. So I was able to train every day. We don’t have many people at Tiger at the moment, so every coach was free to help me. I had more specific training with coach Frank Hickman. I think I had a great camp for this fight.”