I’ve lived in Phuket now for 10 years and seen many changes, but none as dramatic and sudden as those caused by COVID-19. Patong, Kamala, Kata and Karon once had thriving music scenes based on covering Western songs, but all that is postponed. 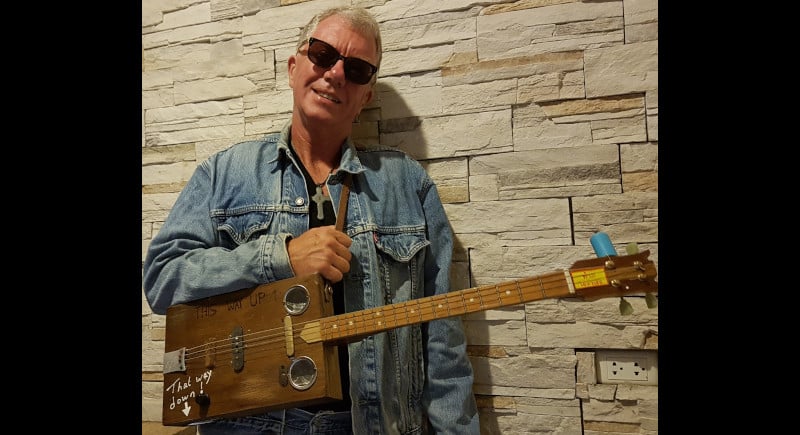 Andy and his cigar box guitar.

Phuket’s musical centre has now shifted to Phuket Town, which is has been proving popular with a new generation of Thai tourists lured there by government subsidies. It also has a number of established Thai music bars around the Seahorse traffic circle catering to local Thais. Phuket Town too has always had a faithful community of foreign expats keen to hear or play live music. Most of us are still here.

Over the next few months, I will tell you more about developments in Phuket’s music scene, about the places and personalities involved. Happily, this island’s musical life has been recovering after the initial lockdown, but it is different from that which we saw before.

Take Phuket Town for example: Before the Sunday night Lard Yai Walking Street project started on Thalang Rd a few years ago, there were already long-established live music venues nearby, such as the Rockin’ Angels Blues Bar, Timber Hut and Music Matters Jazz Club. I’m pleased to say they have all survived so far.

However, we now see a number of newer music venues springing up all around the walking street area. The Column in Takuapa Rd to the south is a Thai bar, playing punchy Thai ballads nightly. Next door is the intimate Bebop Bar, perfect if you want to enjoy some cool jazz after a romantic dinner. A few doors away, Michael’s Bar (now renamed Michelangelo’s Lounge Bar) is under the new and dynamic management of my good friend Don Mangiameli. At my suggestion, he has just started a 5pm to midnight Sunday jam. It is already proving hugely popular with local jazz musicians.

Don’t miss tiny guesthouse ‘43’ halfway along Thalang Rd. There you will find local DJs playing Electronic Dance Music on Sundays. There you can hear the ever-creative Jason Wilder of local radio fame remixing ’70s rock classics with modern syncopated drum beats. Bands from the Pastel Bar and solo artists sometimes perform there too.

Take a walk up Thalang Rd’s Soi Romanee to the 346 Guesthouse on a Sunday night and you will probably hear Thai bands like The Aod Blues Band, Mary Jane or The Vanguard playing Thai and Western songs. They rehearse or perform in the Pastel Bar not far away on Phuket Rd. You may also sometimes hear them in Ngor Kaa Key on Thalang Rd, opposite the Eleven/Twenty Café.

The Vanguard is one of the new upcoming Thai “Indie” bands and is of particular interest. It has a brass section and plays jazzy or funky Thai and Western songs. However, the Western songs it covers are not to be found in what I call the “Patong Songbook” of standards such as Hotel California, Country Roads and Wonderwall.

From all this it will be seen that Phuket’s music scene is actually becoming more creatively vibrant, being now less dominated by professional musicians.  Amateurs can choose to play what they want, and are now quickly filling the musical void that COVID created. This process is driven by the financial squeeze on businesses which don’t have the money to pay bands.

To sum up, Phuket Town is now fast becoming a more creative and diverse place musically, which can only be a good thing. I’ll tell you more about it over the weeks to come and my own efforts to encourage it.

For now, maybe I’ll see you soon in one of Phuket Town’s new or long-established live music venues. You might even find me there knocking out a song or two.

But remember if you do, like many of us now, I’m only doing it for fun. So please… buy me a beverage!