PHUKET: Vladimir V. Sosnov, Consul General of the Russian Federation for Phuket Province, has met with Phuket Vice Governor Pichet Panapong to discuss the prospect of Russian tourists returning to visit the island as soon as early next month.

COVID-19CoronavirusRussiantourismeconomics
By The Phuket News 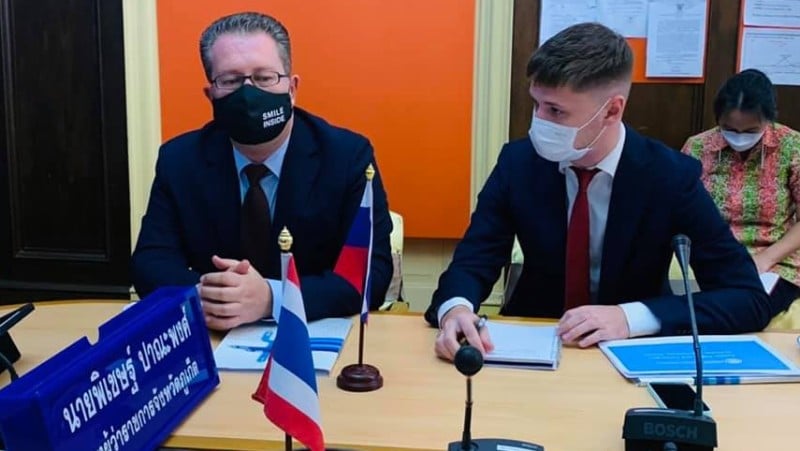 Among the issues discussed was the drafting of a “Memorandum of Understanding on Establishment of Relations between Phuket Province and Kamchatka City Russian Federation”.

The meeting was also held to exchange ideas on the project to open the country to receive foreign tourists under the Phuket Sandbox scheme, including Russian airlines that will travel to Phuket in early November 2021, said a report by the Phuket office of the Public Relations Department (PR Phuket).

Mr Sosnov said there are many Russians tourists interested in coming by travelling under the Phuket Sandbox project, said the report.

“However, the Russian government continues to monitor the situation of infected people in Thailand, where the infection situation is high,” Mr Sosnov said.

“Therefore, the Russian government has not yet recommended that Russian tourists come to Thailand,” he added.

Mr Sosnov reported that The Russian federation considers 40 new cases per day per 100,000 people to be a safe level of infections for Russian tourists to visit.

“On this issue, Mr Phichet Panaphong, Vice Governor of Phuket, explained that Phuket has only 30 cases per 100,000 inhabitants, which is considered a safe area and has strict disease control measures,” the PR Phuket report said.

V/Gov Pichet noted that 496 Russian tourists had travelled to Phuket under the Phuket Sandbox project since Sept 1.

“On behalf of Phuket, Thank you Consul General of Russian Federation for Phuket Province on the occasion of visiting and providing useful information about Phuket,” V/Gov Pichet said, added the report.

“It is a great pleasure to welcome Russian tourists and we hope that airlines from Russia will fly directly to Phuket soon. We would like to recommend that the Russian government expedite the approval of charter flights to fly into Phuket to further promote tourism between Russia and Phuket,” he said.

Before closing the meeting, and before the exchange of gifts, Mr Sosnov pointed out that the year 2022 will mark the 125th anniversary of diplomatic relations between Thailand and Russia, the PR Phuket report noted.