PHUKET: A 12-year-old boy has died after his head was crushed by a tour bus in a motorbike accident south of Phuket Town yesterday afternoon (May 14). Children on a motorbike ride past the secen of the accident yesterday afternoon. Photo: Eakkapop Thongtub 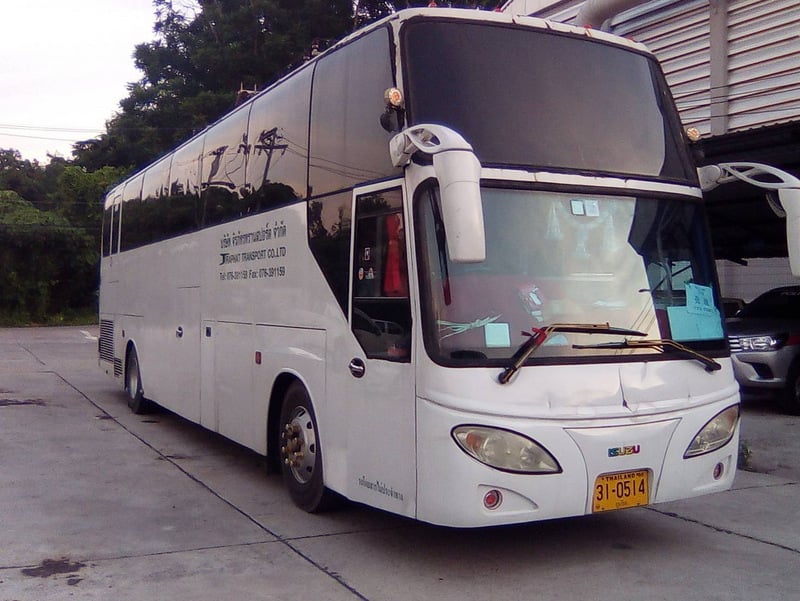 The white tour bus was parked nearby. Photo: Eakkapop Thongtub The driver of the bus, Sorrawit Langu, 42, presented himself to police soon after the accident. Photo: Eakkapop Thongtub

Officers from the Wichit Police were called to the scene of the accident, on the unnamed road near the Naka Shrine in Wichit (see map below), at 2:20pm.

At the scene officers arrived to find a Honda Scoopy motorbike in the middle of the road and the body of Chinnarat Kajutroka, 12, a student at Tessaban 2 Kathu School.

Nearby parked by the side of the road was a white tour bus marked as a vehicle of Jiraphat Transport Co.

The bus driver, Sorrawit Langu, 42, was not at the scene, though he presented himself at Wichit Police Station soon after the accident.

Aphisit Konlee, also 12, told police that he and Chinnarat were riding on a motorbike from Saphan Hin. Chinnarat was operating the motorbike, while Aphisit rode pillion. Both were not wearing a helmets.

Three other youths all on one other motorbike had pulled alongside and the drivers of the two motorbikes started speeding, Aphisit said.

Chinnarat was riding close to central reservation, then something happened, was the best Aphisit could explain to police.

The motorbike fell, spilling Chinnarat and Aphisit onto the road. Chinnarat was thrown into the left lane, into the path of the tour bus, which ran over him, killing him instantly.

Police said they had yet to determine whether to press any charges related to the death as they were still investigating the accident.