PHUKET: Residents in Bang Tao, Cherng Talay, are waiting with bated breath to learn whether or not a seven-story hotel will be built on their small street, with direct impact on the quiet neighbourhood and affecting property prices of high-end villas in the area.

propertylandtourismconstructioneconomics
By The Phuket News A motorbike makes its way down the narrow Soi Pasak 6 in Bang Tao, where plans are afoot to build a seven-storey hotel. Photo: The Phuket News The narrow Soi Pasak 6 in Bang Tao, where plans are afoot to build a seven-storey hotel. Photo: The Phuket News Some people are already leaving. Photo: The Phuket News 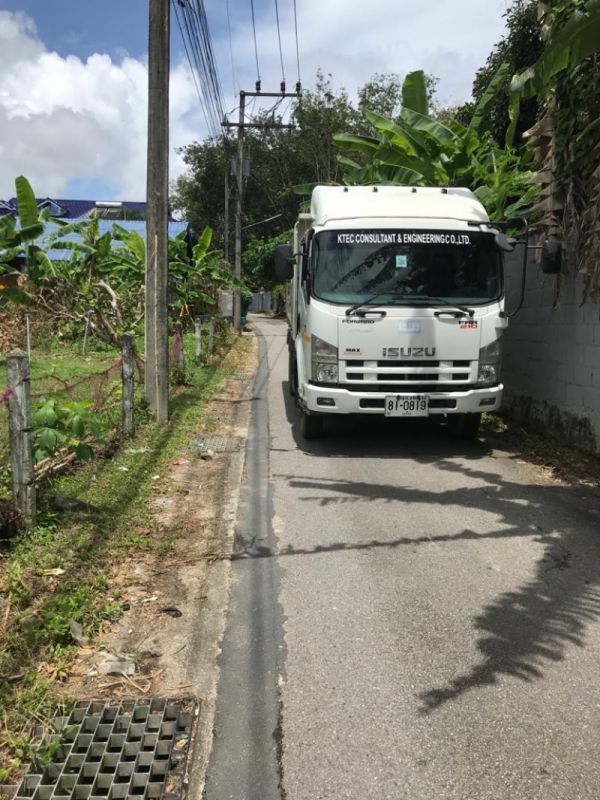 A lone six-wheeled truck blocks the street, showing what space would remain available for passing cars for the whole year while the hotel is under construction, and after the hotel is open. Photo: The Phuket News

The hotel, planned to be built on Soi Pasak 6 amid an area that so far remains a purely residential neighbourhood of only houses, is being promoted as the Nebu Resort Bangtao under the Nebu World brand by Bangkok-based Azure Rich Group.

The resort is promoted as opening in 2024.

However, obtaining an exact definition of what has been approved to be built remains obscured by silence. Even the local residents who will be directly affected do not know. Nebu World has yet to respond to a request for comment; as has the Azure Rich Group, which includes two Australians as key figures. The current status of the project remains shrouded in mystery, with many of the details of the project changing at nearly every turn.

The hotel is currently being promoted by Nebu World as an 89-unit ‘mixed-use’ building on a 1,400sqm site (less than one rai). That definition does not concur with what residents were told when they first learned about the project in 2020. At that time the project was to be 112 rooms in a seven-storey building.

Residents have not been informed of any further progress on the project. Before enquiries by The Phuket News, Azure Rich described the project as, “105 rooms, 10 storey (2 basement and 8 above-ground) 4+ star Mixed-use Accommodation building (Hotel licensed) on 1260 sqm of land, with 4 Star quality and facilities, at 3 Star prices.” That information has now been removed from their website.

Local residents first became aware of the project in July 2020 when they were informed of the results of an Environmental Impact Assessment (EIA) conducted by Phuket Environmental Services Co. Many of the residents said they never received the feedback questionnaire, compulsory under EIA requirements.

One neighbour whose registered company address is 10 metres from the project site never received a copy. One couple said that the questionnaire that was presented by two Thai ladies who knocked on their door was in Thai language only. The two Thai ladies “helped” them by filling in the very comprehensive questionnaire for them.

Regardless, the residents were told that only 30% of local residents who completed the questionnaire objected to the project. The band of residents The Phuket News spoke to disagrees. They have launched a petition which has signatures from “nearly all” residents in the area who will be directly affected by the project, they say.

During ongoing talks in response to the complaints, first voiced in 2020, Mark Tanner, at the time representing Australia-based property consultants Green Arc, responded to many of the grievances raised, including that the new electricity and water supply to the hotel will be specially fitted in order to not affect local residents, waste would be properly disposed of, changes to the design would be made to ensure privacy of residents living in adjacent villas, trees would be planted to maintain a green atmosphere and so on.

Regarding any damage to existing homes in the area by the intensive construction the hotel would require, Mr Tanner wrote, “Pre construction we would conduct a dilapidation report on villas close to the hotel site, to ensure that if any damage occurred during construction our building team would repair and take responsibility for this. Our Building team will also provide evidence of its insurance.”

“And in the event that the two parties cannot find an agreement, the Coordinating Committee for solving problems from the project development need to negotiate for solution. The committee consists of the affected person/s, the project owner, and the mediator who is the local authority (in this case, it is Choeng Thale Tambon Administrative Organization). In addition, the project also provides construction insurance. If any damage occurs, the project will have corrective measurement,” he added, marking the involvement of for Cherng Talay OrBorTor President at the time, MaAnn Samran.

Yet the size of the resort remained an issue. “We have been advised we are fully compliant for an approval but should look to modify some aspects of the design where we can commercially (lowering the height and increasing the setbacks and so reducing our room count below 100 keys is not possible commercially for us with our 3-4 star hotel model) to show respect to the complaints,” Mr Tanner wrote.

Not recognised was the critical issue of the width of the street, Pasak 6, which for most of its length is only 3.5 metres wide, leaving vehicles no room to pass when any large vehicles are trundling along during construction. Any buses travelling to and from the resort would create the same issue. The street is so narrow that even vans and taxis accessing the resort would create frequent headaches.

The response was only “Traffic is up the Soi fronting the site, not the same soi as to SG”, with SG meaning the high-end villa estate Sujika Gardens located behind the resort.

Residents were told that the street could be made one-way to allow traffic flow, but that would mean constant traffic streaming past the high-end homes through the quiet neighbourhood in Pasak Soi 4.

It would also require that the street itself be extended by clearing trees and paving a new road so that Pasak 6 could join the other back streets. The road is currently a dead end into a green area with trees.

“We understand there will be disruption during the construction process, but unfortunately that is the nature of urban development everywhere. On completing the project we see substantial real benefits for the Sujika owners, including life style,” Mr Tanner wrote.

The ongoing talks resulted in a formal meeting on Feb 23, 2021 between the developer, the residents and the EIA consultancy at the offices of the Phuket office of the Ministry of Natural Resources and Environment (MNRE), the relevant agency tasked with approving or denying EIAs for construction projects.

The meeting left the issues unresolved, with Phuket MNRE Chief Watthanaphong Suksai, commenting in conclusion, “The committee has seriously paid attention to the complaints. However, there were different dimensions of disagreement, which the committee must thoroughly consider. I hope the project can be developed and nearby neighbors can live with the minimum impacts as well.”

However, at the meeting Mr MaAnn made his position clear. “Everyone has equal rights, so please keep the law as a priority. If you sue the project, the project has the right to sue you as well. Therefore, we must live together with a good understanding,” he said, noted the official minutes of the meeting.

“The consulting company has already informed that the Soi Pasak 6 road is narrow. However, there are many alleyways that can go through, which will reduce traffic problems. But I think there will be noise issue,” he added

“If there is any additional concerns, please clearly state in complaint letter. Otherwise, when the construction is permitted [sic], it may occur another problem which results in continuously complaints,” Mr MaAnn noted.

An official at Cherng Talay OrBorTor told The Phuket News, on condition of anonymity, that so far a building permit for the project had not been issued.

However, The Phuket News was also told this week through a well-respected, and well-connected, developer that he had been informed that the project had been issued a building permit, and that the EIA had been approved.

The residents have been told nothing.

However, the developer was also told that if the residents conducted another poll and garnered enough support against the project, the EIA would be revoked and the project would go back to the planning stage.

The residents are hoping.

As one resident noted in airing his grievances, “Phuket has plenty of possibilities for such a project with much greater potential for success. We suggest you explore those other options, and we join Sujika residents and those living in the community, in the strongest possible objection to your proposed Nebu Resort and Hotel.”