PHUKET: Local residents have voiced their anger over the poor organisation of the walk-in Pfizer vaccinations at the Indoor Sports stadium at Saphan Hin yesterday (Dec 2). 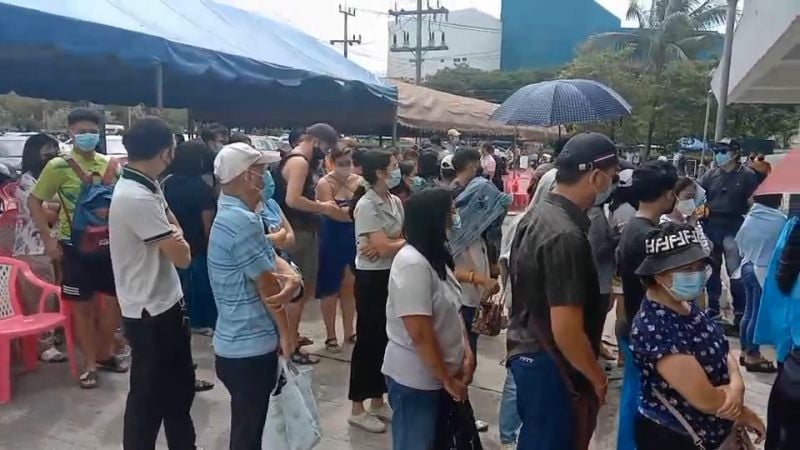 Among the biggest concerns were that people were left standing outside for hours with no social distancing enforced in the queues while waiting to be told to enter the stadium.

When The Phuket News arrived at 11am, local residents were arguing with organisers, calling for them to better organise the waiting area outside the stadium.

Many of the people had been waiting outside the stadium since 5am, and some of the officers present were accused of letting foreigners jump the queue.

After much shouting at the officers and being told to calm down, the situation was resolved and the vaccinations continued to proceed.

One woman who asked to be called “Mrs Somjai” (not her real name), who had brought her daughter to be vaccinated, pointed out the poor organisation yesterday.

“The chair arrangement is without spacing. Temperature measurements are taken only before entering the building, and there seems to be no organisation of the queues at all. People are standing so close they are breathing on each other’s necks,” she said.

“And many of the people here have been standing outside in the sun for at least two hours,” she added.

“The staff today are not as ready as they have been at other vaccination centres, which have been very orderly. When I took another daughter to be vaccinated at another centre, I didn’t see any problems. The queues were in an orderly manner, and it was very organized. But today the vaccination centre is not safe at all. There is actually a greater risk of spreading the coronavirus,” Mrs Somjai said.

Chun Phromanong, 64, had been waiting in the queue since 7am. He was angered by a group of four to five foreigners with small children arriving and being ushered past the crowd into the stadium. He raised his concern with officials at the venue.

“I’m 64 years old and think about it, I can’t go home and I have been here in the queue since 7am. There must be someone who has the power to fix this. Let’s be clear about whether we have enough vaccine doses. If the vaccine runs out, it should be reported that it’s gone because now more and more people are starting to come. Is there enough vaccine[doses]? They have to say so clearly,” Mr Chun said.

“They haven’t reached 1,500 [the number of vaccination injections promoted to be provided at the stadium yesterday], and I don’t know, I’m still in a tent,” he said, referring to the stadium being named in Thai as the “4,000 seat stadium”.

“They say that people over 60 are at greater risk and that you don’t have to wait [to be vaccinated], but I’ve been waiting [in the queue] since 8:30, now it’s noon and I haven’t had my vaccination [injection]. I understand that there are many people waiting to be vaccinated, but I’m willing to give up. I’d rather die,” he said.