PHUKET: The investigation into the encroachment of more than 100 rai of protected forest in Phuket’s Nakkerd Hills will be handed to the Department of Special Investigation (DSI) to investigate further as a special case.

environmentnatural-resourcescrime
By The Phuket News 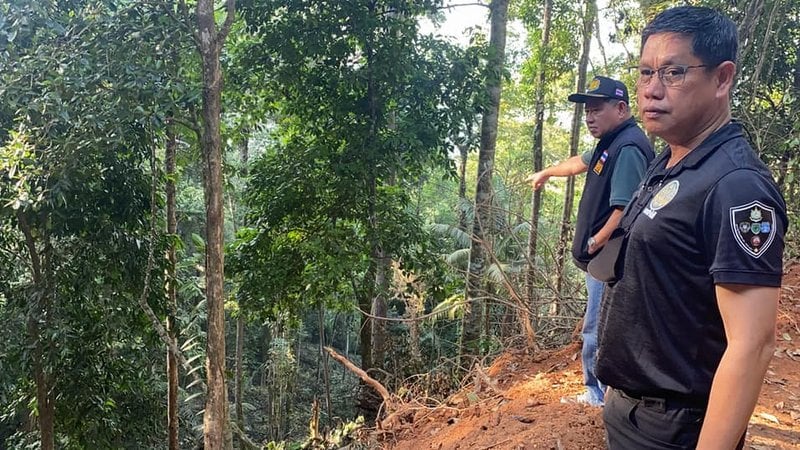 Suphachai Suksai, chief of the Encroachment Prevention and Suppression Region 4 office under the Royal Forest Department, confirmed the move after his officers had surveyed the area, a road and plantations carved out of the protected area straddling the hills between Kathu and Wichit, had affected a total of 108 rai of protected forest.

Mr Supachai and his team of investigators filed a formal complaint with the Kathu Police yesterday (Jan 21).

Isoc, of which there is a provincial office in every province in the country, serves as the political arm of the Thai military.

The affected area, within the Nakkerd Hills Protected Forest Area, is deemed an important source of water flowing into Bang Wad reservoir, the main water supply reservoir on the island, Mr Supachai said.

“From questioning forest officers with the Phuket Land Office we have found that the area does not have the right document [issued to allow any such clearing],” Mr Supachai added.

“The Department of Forestry will notify the Department of Special Investigation to accept this as a special case and to conduct an investigation to identify the offender, as the heavy machinery used to adjust the area and create the road to the top of the hills must certainly involve government officials or ‘influencers’ [sic] behind the scenes,” Mr Supachai explained.

“This will undergo an in-depth investigation,” he added.

“The case will be submitted within two days,” he said.

“As can be seen, this is a high area offering views. It is unlikely that the perpetrators did this for agriculture, it is intended to be for tourism, because the site offers a wide view of Phuket, including many bays,” Mr Supachai noted.

“The value of the land if opened for tourism purposes would be a very high value,” he said.

The road has been cut through a very fertile forest area, this is a watershed forest above Bang Wad Dam, which is an important water source for the people of Phuket, so we must preserve it. There are serious concerns about water supply,” Mr Supachai added.

Mr Supachai did confirm that such works may not be illegal if the correct land document is presented, namely a claim to the land upheld by officials since before the area was declared a protected forest reserve.

“Initially, it appears that this area does not have a title document or any form of land claim for it issued to anyone, but the owner may have a Skor Kor 1 [land use document]. We still don’t know. We cannot check to confirm this if the landowner does not present him or herself, but from our preliminary investigation the exact rights are not clear,” he explained.

“As for having influencers behind it, we are investigating in depth whether any agency was involved in the encroachment and we would like to tell the people of Phuket if any are found,” he said.

“Such deforestation can be reported to the Royal Forest Department anywhere, the defense unit or the forest center. The authorities are ready to conduct inspections in all areas,” Mr Boonlarp said.