policeviolence
By The Phuket News 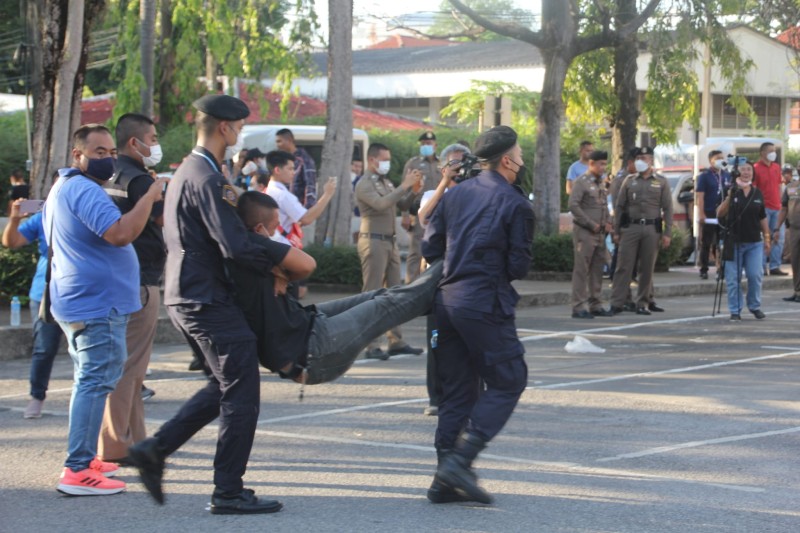 The aim of the exercise was “to train the readiness of officers from various departments to have expertise in handling situations that arise,” noted an official report of the drill.

The simulation included teengers fleeing police, with two teens injured in an accident, sparking a response by 70-80 teenagers gathering in front of the police station, accusing police of excessive force.

As such, the simulation repeated the same chain of events that led to the riot in 2015 that saw hundreds of local residents, not just teenagers, angry at the Thalang Police’s role in the arrest and injury of two teenagers who were chased down by police.

Police arrested at least 64 people involved in the riot, including one man arrested in Bangkok four years later.

The exercise yesterday included a slew of police units and law-enforcement agencies, along with rescue workers to provide medical treatment in such incidents.

Among those taking part in the exercise were personnel from Phuket Provincial Office of the  Volunteer Defense Corps (OrSor) as well as Special Branch police officers and officers from the Phuket Provincial  Police Forensics Unit.

The exercise saw officers train in ways to prevent “the assembly” of angry mobs, and where negotiations failed to be able to respond using arrest tactics in accordance with appropriate measures set out by United Nations guidelines, noted the official report.

“The operation set out for officers to together analyse and assess the situation to lay out guidelines to prevent incidents that may actually occur in the area and stop [such] incidents in a timely manner, and is considered training for all officers to be ready to perform their duties when an incident occurs in their area of responsibility,” the report said.