PHUKET: Police are hunting for a suspect who first attempted to kick a woman off her motorbike and then robbed her threatening with a knife this Thursday (Mar 1). 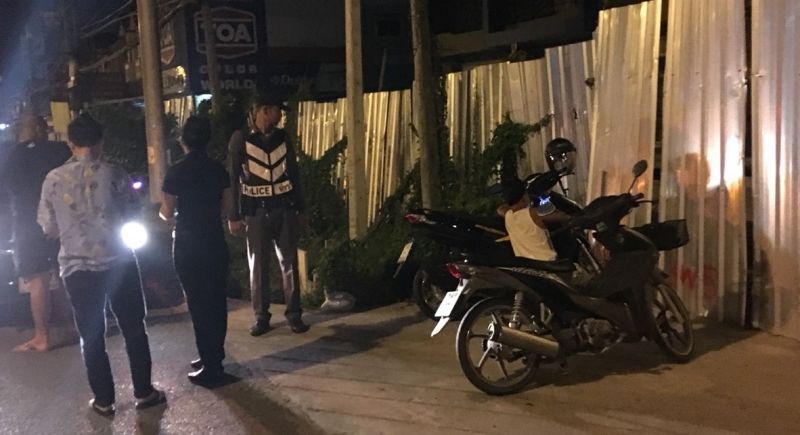 Ms Supaporn Supabmanee had received injuries to her arm after the suspect had pushed her, said Thalang Police. Photo: Thalang Police

Capt Natthi Pichitchainittimet of Thalang Police received report of the crime at about 11pm on Mar 1. According to Capt Natthi, the robbery took place at the entrance into National Housing Authority complex on Thepkrasattri Rd in Baan Lipon, Srisoonthorn. The victim was identified as Ms Supaporn Supabmanee.

“The victim told us that the suspect was dressed in a gray jacket, a white shirt, long jeans and a full-face black helmet. He was driving a black and white Honda Wave 110 motorbike with no license plates,” said Capt Natthi.

“The suspect used his foot to push the pedal of Ms Supaporn’s motorbike to make it to fall down. After she stopped the bike and got off, he used a knife to threaten her. He demanded that she give him her bag and she did it. The suspect got away with the handbag containing an iPhone 6s, car keys, a fruit carving utensil and B600 to B700 in cash. The victim was too afraid to follow the criminal, who then drove the motorcycle back towards Baan Lipon Hardware Shop before disappearing,” Capt Natthi added.

According to Capt Natthi, Chief of Thalang Police Col Sompong Thipapakkul has already ordered to investigate the case and check CCTV footage to track down the suspect.

“Women who drive alone at night, watch out,” warned the Facebook user.