PHUKET: In one fell swoop the Agricultural Land Reform Office (Alro) has swept away crimes stretching back decades and opened the floodgates for mass deforestation across the country – and unveiled an opportunity for some people to become overnight baht-billionaires through property development centred around Patong.

opinionpatonglandpropertytourismeconomics
By The Phuket News 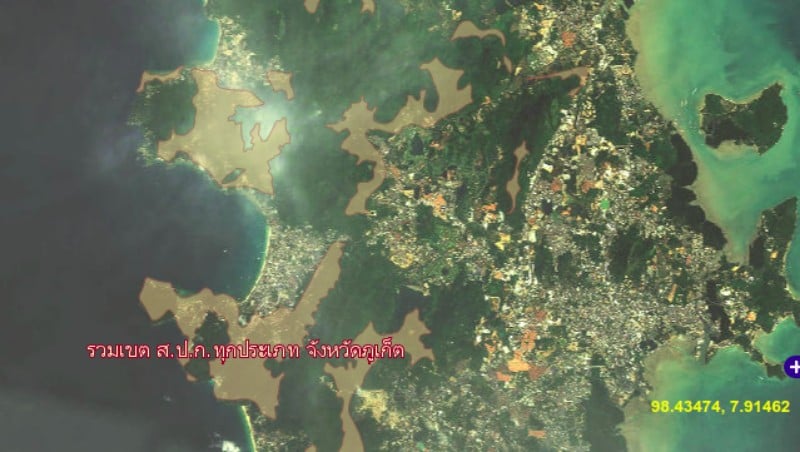 The shaded areas on the DSI’s interactive online map show the swathes of SorPorKor land around Patong. Map: DSI

Alro Secretary-General Vinaroj Sapsongsuk on Friday (Nov 13) announced that the agency had revised its regulations to allow SorPorKor landholders to develop their plots into apartment buildings, gas stations, food-processing plants and retail centres, among other developments.

The move was also intended to close loopholes, he said. According to Mr Vinaroj, some people were not playing by the rules – probably Thailand’s worst-kept secret.

Alro was formed under the Land Reform Act of 1975, and has since become known by its Thai initials for its official name: SorPorKor. The SorPorKor land-reform project intended to provide poor farmers with what was deemed to be degraded forest areas so that they could eke out a living growing crops on state land.

Under the “nine rights” laid out in the act, the farmers allocated SorPorKor land were issued a SorPorKor land-use document and were allowed to use the land for agricultural purposes only. The land-use rights were allowed to be passed on to family members, but the land could never be sold legally as it was to forever remain owned by the government.

That proved to be a sticking point, as a nationwide land grab unfolded and reached crisis point by the mid-1990s. Echoes of the same scheming land grab can – well, until now – be seen in the news today.

What has since become known as the “SorPorKor scandal” began in 1994, and by the following year had brought down the Democrat government of Chuan Leekpai.

Mr Chuan today serves as the Speaker of the House of Parliament, a position showing the support he has across the floor as a respected politician – as if testament to the fact that the scandal that brought his government down was something beyond his, or anyone’s, control. It’s almost as if even Parliament has conceded that when a country is so rife with corruption there is nothing even a prime minister can do to halt the juggernaut.

The SorPorKor land grab left one local politician in Surat Thani, for years now a leading national figure in politics, notoriously catapulted into riches. Phuket was no exception; a handful of people on this island literally became baht-billionaires within the span of a few years.

With the announcement by Mr Vinaroj on Friday, all those crimes in stealing SorPorKor land, often with the assistance of officials, will be swept aside. It has yet to be seen whether all the current prosecutions for illegal occupation and use of SorPorKor land, including those launched after investigations by the likes of the Department of Special Investigation (DSI), will still proceed now that Alro itself has changed its terms of use.

More than 40 million rai across the country has been designated as SorPorKor land. In 2014, The Phuket News confirmed that 32,372 rai of SorPorKor land was in Phuket.

Much of that land is located around Patong, both north and south and even creating the building line along the hills at the back of the town. The rest of the SorPorKor land in Phuket is mainly located in the centre of the island. Only small pockets of SorPorKor land are in the top half of Phuket.

With the new rules allowing development on SorPorKor land, the revised value of the SorPorKor land around Patong is mind-blowing.

In the renowned disputed claim of just 65 rai overlooking Freedom Beach, the land was valued at B150 million in 2007. Ten years later it was estimated to be worth B4 billion. That’s just for 65 rai. Now keep in mind that Phuket is home to more than 32,000 rai of SorPorKor land – and while legally entitled holders of SorPorKor land are still not allowed to sell the land, they are fully entitled to come to a private agreement to allow an investor, foreign or domestic, to build on and develop that land for them.

Literally rags to riches stories may soon be aplenty in Phuket, but as the government currently seems to be going through a phase of“flip-flop policy reversal”, it would be prudent to note that there is still plenty of time for much to change on this front, including another possible revision of the terms of use for SorPorKor land.

But one thing is for sure, if the government wanted to “revitalise the economy” quickly without resorting to tourism, this is certainly one way to do it, regardless of past and current crimes.