PHUKET: After a deplorable 2020, everyone thought that 2021 would be better. How wrong we were. As we enter yet another year under the shroud of COVID-19, Phuket still finds itself struggling to get back on its economic feet, still suffering the financial impact of a tourist island without tourists with many households across the island without base level income. 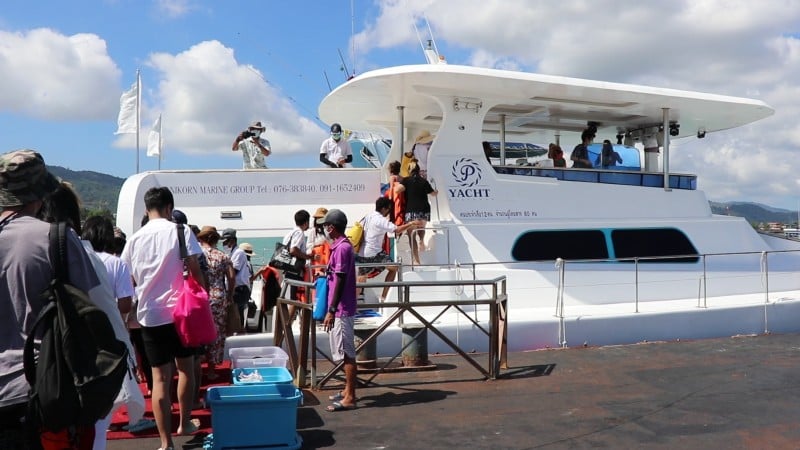 Tourists board a boat at Chalong Pier to visit the nearby islands yesterday (Jan 1). Photo: PR Phuket

The full impact of the wave of Omicron infections sweeping around the world has yet to be felt as hesitant governments wait to truly understand how deeply the variant will affect communities. Right now it is the policies defending against the spread of the virus doing more visible harm than the actual virus itself.

The incessant stream of reports in the international media have been mind-numbing, with lots of talk of risk of hospitalisations overwhelming “in some areas”, without actual data. Worse has been the continuing highlighting of the explosion in the number of infections, without differentiating how many of those were Omicron.

One astute observer pointed out to The Phuket News, “Isn’t this what we wanted? A diluted version of the virus that poses much less risk [of killing people]?” With the record numbers of infections being reported across Europe, people should be praying that it is Omicron, not the Delta variant.

But the reports have done their damage. One general manager of a major hotel on the island told The Phuket News that once the government had confirmed that Omicron had been identified as a local transmission in Thailand, mass cancellations of bookings ensued.

What is important is that the cancellations were not out of fear of contracting Omicron while on holiday in Thailand, but out of fear of not knowing what entry requirements they tourists would face in trying to return home after their holidays were over.

How soon the Omicron impact will blow over remains to be seen. Reports by Phuket Immigration and the Tourism Authority of Thailand (TAT) have shown daily tourist arrival figures to Phuket slowly growing to mid-4,000s then sliding down to mid- to high-2,000s. Yesterday (Jan 1) the number bounced back to high 3,000s.

Looking back at 2021, Phuket has had its shining stars in doing their best to help people across the island make it through the year.

One Phuket and its volunteers in helping provide food security to people in need has been exemplary. Also deserving special recognition is Shaun Stenning and the volunteers helping his 5 Star Marine to keep delivering ‘Life Packs’ of food and essential items to those unable to provide for themselves.

Shaun Stenning’s efforts have now evolved into the Living Waters Foundation, the only foundation on Phuket established purely to help support very poor communities into developing long-term sustainable streams of income. In short, doing the government’s job for them.

On that note, Governor Narong and Vice Governor Piyapong deserve special mention in their efforts throughout the year. As explained in a previous Phuket Opinion, many foreigners on the island simply do not fully appreciate what it takes to achieve what they have done, in the realm of Bangkok-based superiors dictating which policies they are permitted to implement in Phuket, and which policies they may not. It may not look like it on the surface, but they have been among the best provincial leaders this island has seen in two decades.

Purely by example to highlight the constraints they must work with, it has been sickening to witness the near-blatant political decision by the national government to roll out and heavily promote the financial assistance provided to entertainment venue workers in areas declared “red zones” as part of their “We support you” platform, while no similar workers or businesses in Phuket were given the same simply because of the unspoken policy to never declare Phuket an “economic disaster zone”.

While these other areas, namely Bangkok and its surrounding provinces, were considered “lucky” in this, Phuket officials moved forward to create their own luck and allow Phuket pubs and bars to reopen as “restaurants”. A move that taught the national government that if we are to live with COVID-19, and its variants, the secret lies in the “COVID Free Settings” that businesses must uphold. There is no other way.

As we enter the new year, our third under the cloud of COVID-19, we wish one and all the very best of making our own luck in 2022.