PHUKET: The Ministry of Tourism this week released its Tourism Economic Review, which other than reporting what everyone already knows – that international tourism has been devastated and that domestic tourism has also taken one almighty hit – had one clear message: the longer that international tourism remains shut down, the longer the recovery itself will take even after measures to allow tourism to return are taken. 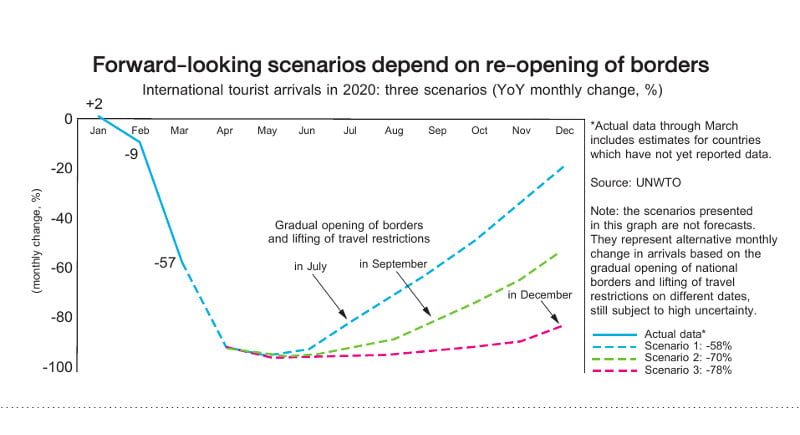 The longer the reopening of international tourism is delayed, the longer the actual recovery period will be. Image: MoTS / UNTWO

Citing projections by the United Nations’ World Tourism Organization (UNTWO) based on tourism statistics through March, the report points out that the gradual reopening of borders and lifting of travel restrictions in July would likely result in a comparative loss of 58% of international arrivals year on year by December. However, a delay in reopening international tourism until September would see that figure blow out to an impact of -70% of international arrivals year on year. A third scenario, of delaying the reopening of international tourism until December, will see that fall further to a loss of -78% of arrivals compared with last year.

The campaigns in Thailand are underway to drive tourism, and there are upbeat reports that it is working, except for here in Phuket. Rayong and Trat are enjoying a return of visitors this long weekend, but for Phuket the positive note is still in the verbage.

In Pattaya, several large beachfront hotels say their bookings have jumped to a strong 90% from July 24-28, according to a local tourism industry source, reports the Bangkok Post.

Pattaya is one of the most popular seaside destinations when it comes to spending a holiday as it is close to Bangkok, the report notes, with the source reporting that the heavy hotel bookings are believed to be a result of sales promotions and the Rao Tiew Duay Kan (We Travel Together) tourism campaign where the government offers subsidies for people’s holidays.

In Trat, hotels and resorts on Koh Chang and Koh Kut islands were close to booked out. The province’s two ferry piers were yesterday jam-packed with cars waiting to board a ferry to the islands, the report added.

However, for Phuket, Tourism Authority of Thailand (TAT) Phuket chief Nanapsorn Kakai, well experienced and well respected for her career with the TAT, is still talking about the 6,000 visitors reported to have visited the island during the previous long weekend from July 4-7. For this long weekend (July 25-28), the strongest comment she could give the Bangkok Post was that she “expects” visitors this weekend “would pump money into the economy”.

The positivism comes a day after Manager Online reporting that Ms Kakai had confirmed that only 10% of rooms available in Phuket had been booked for this weekend. Trying to keep the positivism rolling, Ms Kakai pointed out that some five-star resort were fully booked for this weekend, yet Phuket Chamber of Commerce President Thanusak Pungdet pointed out that those bookings were most likely Thais who usually travelled abroad for such holidays, but this year had no option to do that.

The poor bookings for Phuket this weekend follows Mr Thansuk’s warnings earlier this month that the push to boost domestic tourism was not likely to work for Phuket as it is expected to help the likes of Pattaya.

“Phuket is not like Pattaya. They have different domestic tourist markets to appeal to. When it comes to having cheap holidays, Thais do not travel far from their home provinces. Pattaya is close to Bangkok and people from Isan [Northeast Thailand] generally travel to visit the Eastern seaboard – not Phuket,” he told The Phuket News two weeks ago.

Among the campaigns what has been quiet in the English-language press is the “Travel to Thailand, our guard is not down” (“เที่ยวเมืองไทย การ์ดไม่ตก”) tourism promotion blitz launched by the TAT on Friday under the concept of: “‘non-stop’ to publicize and build confidence for both Thai and foreign tourists in recognizing that Thailand is a reliable destination for the strength of the public health system and have hygiene safety (Amazing Thailand Trusted Destination).”

The push, through different videos, by positive example tells Thais what is needed to restore confidence among tourists to want to choose Thailand as a holiday destination while showing tourists what they should expect when they come here. They are excellent.

What is odd is that this campaign is being launched now, appealing to international tourists, while all but medical tourists and visiting businesses folk in specific industries remain banned from entering the country.

At the launch on Friday (July 24) of yet another simultaneous campaign – the “Thailand Smiles with You” campaign to promote Thailand to the world through Leicester City FC though a joint effort by the Ministry of Tourism and Sports, the TAT and King Power Group – Prime Minister General Prayut Chan-o-cha said he hoped that the overall picture of the Thai economy would improve once travelling and tourism resume in the future.

Indeed, but as always the silence on what the plan actually is still emanates from Bangkok, as if they are worried that any plan announced will be perceived as a promise. Sheer fear by officials that the government will be held responsible for any further delay in reopening the gates for international tourists regardless of international circumstances is dominating the narrative.

Meanwhile, the obvious hint is that after Sept 26 any tourists still stuck in Thailand will again be treated by Immigration as tourists, who will need to prove their need to stay in the country. The only way that such a policy could pass muster through international diplomatic channels is if such tourists by that date will finally have options to go home.

The Sept 26 deadline marks six exact months since the first “visa amnesty” came into effect, and puts any plan to reopen international travel smack bang on the UNTWO predicted recovery period for travel to mostly recover by late 2020 early 2021 – exactly what leading figures have been saying they expect tourism to recover by. We can only hope.