PHUKET: The Phuket Land Transport Office (PLTO) has posted yet another clarification stating that the Department of Land Transport (DLT) is the only authority issuing genuine driving licenses in Thailand. The agency has warned against buying driving licenses online amid growing numbers of such offers for foreigners on social media.

transportcrime
By The Phuket News 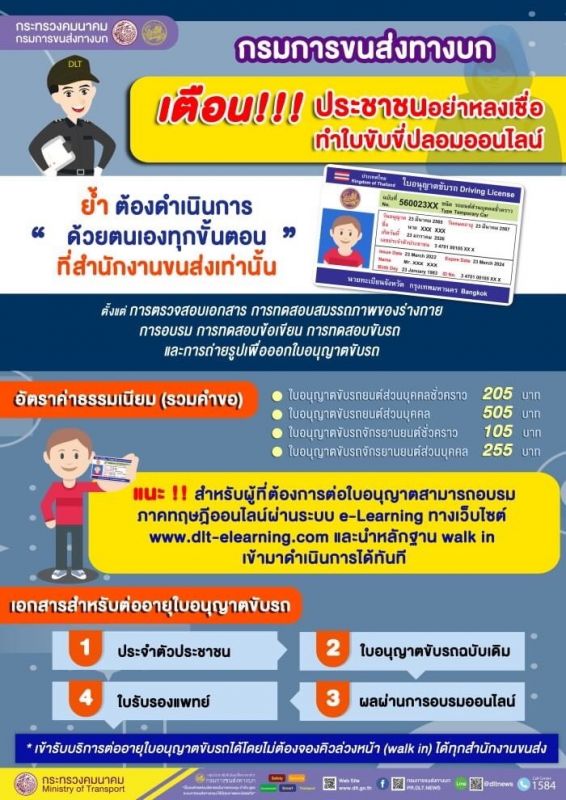 “The Department of Land Transport warns!!! People should not be fooled into making fake driving licenses online. We repeat, all steps must be performed by the apical in person and at the transport office only” says a warning posted on the PLTO website yesterday (Jan 12).

The warning was posted along a digital leaflet repeating the same main thesis and providing some additional information, including current fees for licenses.

The PLTO reminded that in order to get a genuine Thai driving license for a car or a motorcycle the applicant should pass a physical fitness test, watch an educational video and have photos of them taken, which can be done only in person at the PLTO.

If the driving license is not “converted” from a foreign one but received “from zero”, the process also includes passing a theory test and and a practical driving test. A medical certificate and a Residence Certificate / Work Permit should be provided in all cases.

The process of issuing a driving license also includes adding corresponding information to the online database, which providers of fake driving licenses cannot do, the DLT says.

Thai authorities have been fighting the sale and use of fake driving licenses for years, but until recently the campaign has been aimed mostly at Thai people and is still conducted in Thai language only. Meanwhile, since Thailand’s reopening for tourism in 2022, the criminal service is widely advertised to foreigners and commonly marketed as assistance in getting a Thai driving license, but without having to pass any tests and even visit a DLT office (PLTO for Phuket).

The illegal providers of fake driving licenses also hurt the image of companies, offering legally acceptable assistance in getting a driving license. It could be expected from the latter to join the DLT’s effort in suppressing the illegal business, but the law-abiding part of the industry remains silent.

Current fees for driving licenses, as per the PLTO’s most recent announcement, are as follows:

“People who need to renew their existing licenses can do their theoretical training in advance via the e-Learning system on www.dlt-elearning.com and bring evidence with them when coming to the DLT to proceed ’into action’ immediately,” the DLT says.