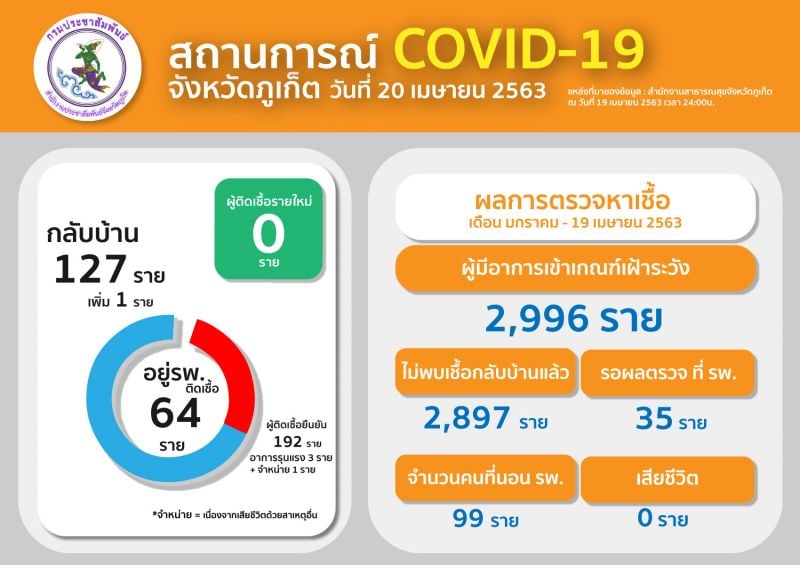 Today’s update brings the total number of people in Phuket recognised as infected with the disease since the outbreak began to 192.

The report does mark that the total of 192 does include the Hungarian tourist who died from his injuries in a road accident but was confirmed as infected with COVID-19 while in hospital care. (See story here.)

According to the report released this morning, so far people 2,996 have been put under observation for possible infection of the virus.

Of the 2,996 placed under observation, 2,897 “Persons Under Investigation” (PUI) had been checked and gone home. The remaining 99 are still receiving hospital treatment, said the report.

Of those, 35 are waiting for test results to confirm whether they have been infected.

The report noted that 127 people who had been confirmed as infected since the outbreak began had recovered and been discharged from hospital care.

The two areas specifically targeted in Cherng Talay are the Moo 2 and Moo 5 neighbourhoods in Bang Tao.

The ICC reported that of the 965 registered households in Moo 2, 665 households were checked. Of the area’s registered population of 4,633, 2196 people were checked, leading to five cases of possible infection being identified.

A total of 630 households were checked in Moo 5, the ICC reported. The area has 619 registered households, with the ICC explaining the difference as “rental households”.

Of Moo 5’s registered population of 2954, 1948 people were checked, leading to seven cases of possible infection being identified, the ICC noted.

The Phuket Provincial Health Office (PPHO) is reporting that the number of confirmed cases being identified is lower than initial predictions, which expected Phuket to have 404 confirmed cases of people infected with COVID-19 by April 19, and 677 cases by April 24*.

In a graph released yesterday, the PPHO marked its statistics to date, with records starting on Mar 20.

The graph is marked as follows:

Green line – number of people who had or are still receiving hospital treatment.

* CORRECTION: The initial prediction was as is now explained: for Phuket to have 404 confirmed cases of people infected with COVID-19 by April 19, not 677. The error is regretted.