PHUKET: Phuket officials yesterday (Aug 4) held a brainstorming session to come up with projects to be deployed under the 10-point provincial policy ‘GEMMMSSTTF’ to help the island’s economy recover. 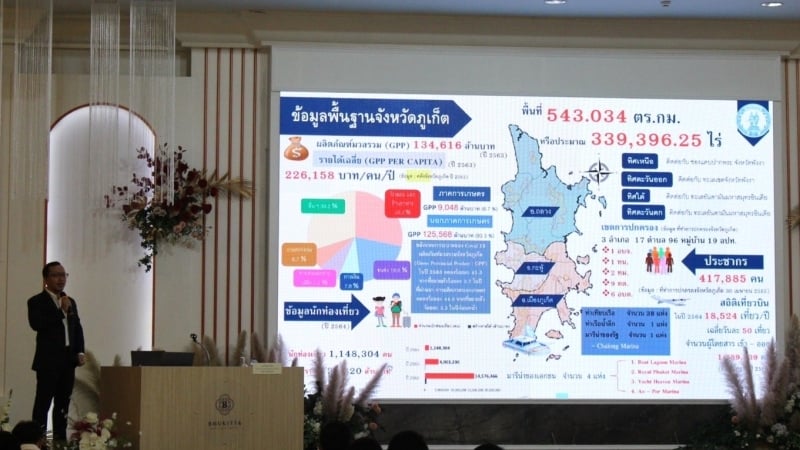 The session, held at the Bhukitta Boutique Hotel in Phuket Town, was led by the Phuket Provincial office of the Strategic and Information Group for Provincial Development.

The brainstorming session was held to formulate government action plans for the government fiscal year 2024, for which budgets must be submitted before Sept 30.

The target groups from whom ideas were sought yesterday for developing the island’s economy comprised people from government agencies, local government organisations, the private sector, civil society groups and educational institutions in the area

Watcharapong Chiso, Director of the Strategy and Information Group, presented the criteria for provincial development plans and the province’s annual government action plan.

“The current development plan is for 2023-2027, currently under the leadership of Phuket Governor Narong Woonciew. Its development goal is for Phuket to be a centre for tourism, education and service innovation at international standards and sustainable development,” he said.

“There are three development issues: 1. Being an economic city driven by innovation and high-value international services, 2. Developing a city to support modern and environmentally friendly growth, and 3. Developing people, society, security and safety and peace,” he added.

“In addition, in the provincial development plan There will be guidelines for the development of 10 economic pillars or GEMMMSSTTF, which is an important policy of the Phuket Governor Mr Narong, who wants to have other development branches different from the past so that Phuket is not dependent on tourism as the sole one pillar,” Mr Watcharapong said.

Of note, the provincial economic policy for years has been eight-point ‘GEMMMSST’, focusing on developing economic drivers in the fields of Gastronomy, Education, Medical and Wellness, Marine Tourism, MICE meetings and events, Sports & Events, Smart City and as a Tuna Hub.

The official report of the brainstorming session yesterday did not elaborate what the “TF” now added to the policy represented.

The representatives yesterday were divided into small groups to come up with project ideas targeting six product groups: 1. Agriculture, 2. Tourism and services, 3. Trade and investment, 4. Quality of life of the people towards a livable society, 5. Security and 6. Environment.

Each small group meeting then presented their ideas to the rest of those present.

Mr Watcharapong explained the goal of the session was to help officials to prepare a government action plan for the fiscal year 2024 according to the budget output determined by the Budget Bureau.

“The province will request for the budget to be expanded in the government action plan for the fiscal year 2024, which is scheduled to be submitted to the Office of the National Economic and Social Development Council [NESDC] within September 30, 2022,” Mr Watcharapong said.