PHUKET: A putrid canal of black water emptying into Chalong Bay has gained the attention of officials in Rawai, who say they will hold the culprits accountable. Fish entering the waterway near where it empties into the sea are dying. Photo: Supplied 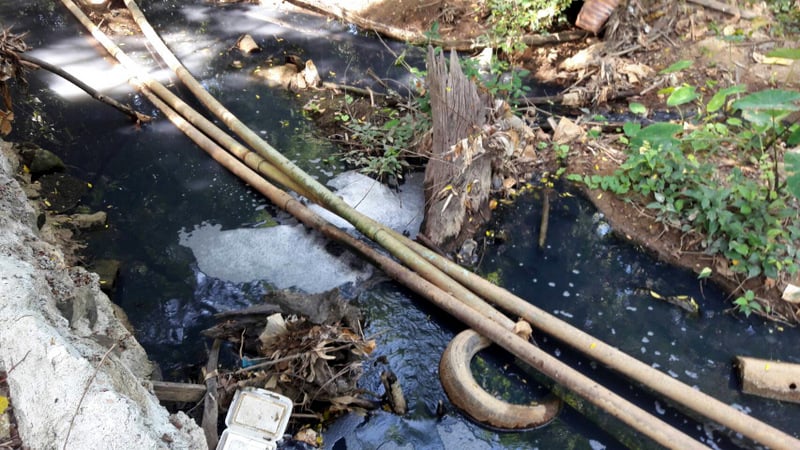 Photos of the canal provided to The Phuket News show fish dead in the water, presenting the ominous possibility that the level of contaminants in the polluted are killing fish and other marine life in the area.

“This has been a problem for a long time and local residents in this area have repeatedly filed complaints about it,” Mr Sak said.

The small canal runs past the Tesco-Lotus store on Wiset Rd, which local residents have long suspected is contributing to the problem, he added.

“We went to investigate the area near the Tesco-Lotus store yesterday,” Mr Sak told The Phuket News on Friday (Mar 2).

“At first, the residents believed that the dirty water was coming from the Tesco store, but I have been informed by the Rawai public health officials that the Tesco store has its own wastewater-treatment system,” he said.

“It comes from the waterway in Moo 4 Baan Bang Kontee,” Mr Danan told The Phuket News.

said yesterday that he was unaware of the problem until contacted by The Phuket News, despite Mr Sak and Mr Danan inspecting the canal on Thursday.

However, he confirmed that on hearing the news that he inspected the Tesco store in person yesterday (Mar 2).

“I saw for myself that they have their own wastewater-treatment system and the system is checked every month,” Mr Surachet said.

“And the Makro store, which isn’t even near this waterway, also has its own wastewater system, so we are sure it is not them,” he added.

However, Mr Surachet did not elaborate on what further steps would be taken to identfy the source of the pollution.

Mr Sak, however, confirmed that he would revisit the area on Monday (Mar 5).

Councillor Sak did postulate that garbage dumped in the canal combined with the recent lack of rain might have heightened the toxicity of the little volume of water that does run through the canal today.

“The waterway was dry for a long time, and became blocked with leaves, soil and garbage. This could be what has caused the water in the canal to turn black,” Mr Sak explained.

Village headman Danan noted that plans were being put forward to dredge the canal to help the water flow more easily.

“For the budget, I talked with District Chief Wikrom Jaktee a few days ago,” Mr Danan said.

“After we determine how much this will cost, he will ask for the budget from the provincial government,” he added.

“We will return to the area on Monday with engineers to asses the width and length of the canal to be dredged, and that will help us figure out how much the dredging will cost,” he explained.

Regardless, Councillor Mr Sak cautioned that any businesses in the area found to be polluting the waterway will be held accountable.

“The industries in the area have to treat their wastewater before releasing it into the canal,” he said.

“If they do not, their businesses will have to cease operations until the problem is fixed,” Mr Sak warned.

Always that nonsense talk of Anutin. Now playing with words again. No need to say more about Anutin,...(Read More)

It is difficult to understand how this 'foreign male' managed to visit all of these high pro...(Read More)