PHUKET: The notorious illegal beach club at Nui Beach in Karon, where tourists for years were extorted entry fees and even threatened with violence, has been torn down by officials for illegally occupying state forest land. 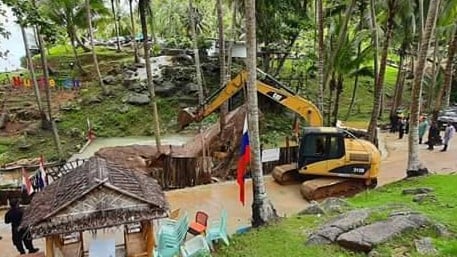 More than 100 officers descended on the site yesterday (July 9), bolstered by security personnel from the Royal Thai Navy Third Area Command and led by the Phuket branch of the Internal Security Operations Command (Isoc).

Isoc, which has a branch in every province in the country, serves as the political arm of the Thai military.

The enforced raid team was present to support Phuket and regional forestry officials to execute an official order served in June last year.

The order instructed the illegal occupiers of the land to remove any structures built illegally at the site. The lack of any action to do so empowered officers to enter the site and remove the structures themselves.

The offenders were taken to Karon Police Station for prosecution for illegally encroaching ons state forest land within the Nakkerd National Forest Reserve, the report noted.

Efforts to tear down the beach club began in February 2015, after complaints from local people that staff of the Nui Bay Member Club had barred them from walking to the beach unless they paid a fee, and had fired shots to threaten them.

As a Navy-led team of officers arrived to investigate the incident, Jakkapong Sawadtawee, 30, a member of the club staff, tried to get away in his car. Navy personnel chased him down and forced him to stop.

In his car they found the Glock 9mm semi-automatic pistol and the gear for smoking ice. Another 20 staff were lined up, ordered to write down their names and were given a drugs test.

A second raid in May that year ensued after it had been confirmed that the land document issued for the site at the beach was illegally issued, and that a beach club built on it was therefore illegal, too

The beach club was ordered to be demolished in July 2015 following violent threats from its operators towards people who tried to access the beach without paying. Inspections revealed that the structures had been illegally built on sand. However, the demolition never happened and was never enforced.