Many of us will remember the moment we ‘woke up’ to plastic pollution. For millions of viewers of BBC documentary mini-series Blue Planet II, it was an al­batross unwittingly feeding plastic to its young. For oth­ers, it was the powerful viral image of a seahorse off the coast of Indonesia car­rying a cotton ear bud, its tail wrapped tightly around the plastic tube. 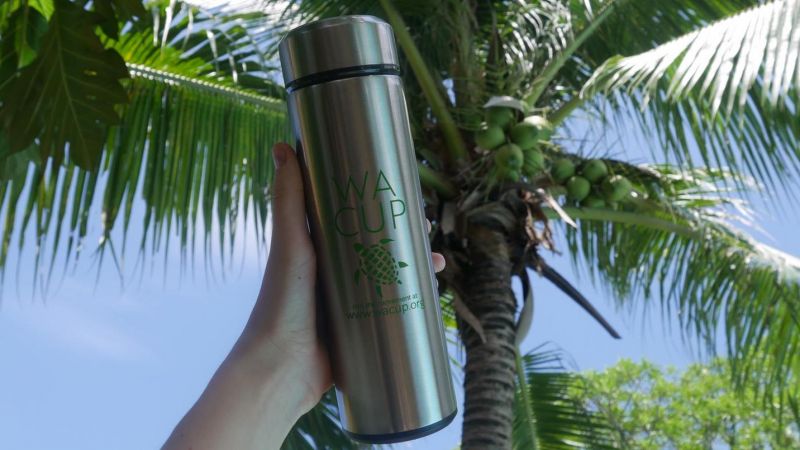 Clare’s students, pictured cleaning a Phuket beach, have jumped on board the WA CUP movement. For Clare Thomson, expat, teacher and founder of UK-registered charity WA CUP, that moment came in 2017 in the coastal Vietnamese city of Phan Thiet, her home before moving to Phuket in 2018. A keen surfer, Clare would regularly head to nearby Mui Ne Beach after school, joining a host of kitesurfers and kayakers taking advantage of the white sands and strong winds. But as the tides changed, waves of plastic rolled in, spilling monumental amounts of de­bris across the beach.

These waves brought Clare some­thing else too: the uncomfortable reali­sation that her single-use plastics were headed for the same aquatic fate. Subse­quent research into solutions highlight­ed a gap in the market for a reusable bottle but with an educational movement at work behind it. And so WA CUP – a play on words of ‘wake up’ – was born.

As a not-for-profit organisation and a solo venture, the early stages of WA CUP were a steep but ultimately rewarding learning curve for Clare as she tested different materials in a Goldilocks-style process. BPA-free plastic, despite being reusable, is still, well, plastic. Alumini­um has an environmentally unfriendly production process and is prone to dents. But stainless steel? Just right.

The most recent bottle design is sleek and silver, keeps hot drinks hot and cold drinks cold and is decorated with the WA CUP logo, a sea turtle drawn by Clare and digitised by her graphic de­signer brother. The sea turtle holds par­ticular significance as it’s often regarded as the animal most deeply impacted by plastic pollution, mistaking plastic bags for its favoured food source of jellyfish, an often fatal attraction.

More than a line of bottles – and re­usable cotton tote bags – WA CUP is a grassroots movement, and all proceeds go towards educating children across Southeast Asia about the harms of single-use plastics through educational resources designed, using her teaching experience, to be not only informative but engaging and interactive too.

On a global scale, just five countries make up 50% of the globe’s mismanaged plastic waste (China, Indonesia, the Phil­ippines, Vietnam and Thailand), and WA CUP bottles have reached schools across each of these countries – with the excep­tion of Indonesia – as well as the UK and Spain. Bottles have lined the desks of her students in Vietnam and Thailand, who have jumped on board, even setting up their own eco projects and, in some cases, working towards making their schools single-use plastic free.

Clare also encourages students to map out local refill stations, which dis­pense drinking water for as little as B1 a litre, and is lobbying for more reverse osmosis machines on the island to avoid the paradoxical outcome of WA CUP-ers filling their stainless steel bottles with water from single-use plastic bottles.

Her efforts have been recognised and endorsed by Eco Thailand, a founda­tion that brings together and promotes eco-conscious enterprises, and WA CUP sits proudly alongside a number of other chosen resorts, animal welfare organisa­tions and community groups.

Waking up to plastic pollution is one thing, but using your spare time and re­sources to instigate change in your adop­tive country and beyond? That certainly is something to be commended.

For more information, visit www.wacup. org. To purchase a WA CUP bottle (sold at B300) or a tote bag (sold at B100), contact Clare through the Facebook page or on 0660587584.
www.facebook.com/wacupmovement
www.instagram.com/wacupmovement