Phuket Music Scene: Jazz & Blues festival back with a buzz

Phuket Music Scene: Jazz & Blues festival back with a buzz

Phuket’s annual International Jazz festival used to take place every April outside Music Matters Jazz Bar in Chana Charoen Rd in Phuket Town until COVID struck. Started in 2012 by Filipino Jazz pianist Jeffery Sevilla, we saw Jazz musicians jetted in from the Philippines, Indonesia and even the far-off UK. Over a thousand Jazz lovers visited the festival in 2018 before it tragically had to stop as a result of the pandemic. 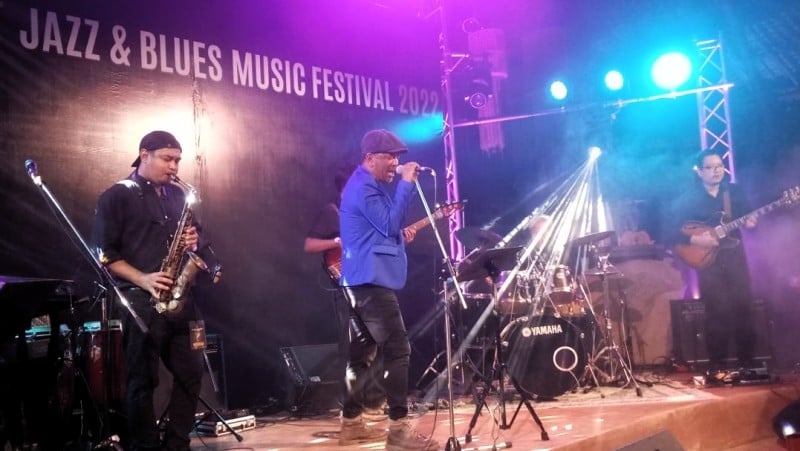 Blues and Soul on stage at the festival. Photo: Andy Tong Dee Born in Catarman on Samar Island in the Philippines, Jeffery first arrived here in 1996 and started off by scraping a living playing piano, living in a tiny attic in Chana Charoen Rd until he started Music Matters downstairs in 2000. I have happy memories of singing a little and learning to play Jazz drums there. Sadly, Music Matters did not survive the pandemic, and its popular Wednesday night Jazz jam is no more.

However, as Albert Einstein once wisely said, “In the midst of every crisis lies great opportunity,” and Jeffery was not to be defeated. Jeffery moved the Jazz jam post-pandemic to Michelangelo’s Bar in Takuapa Rd nearby. Held now on a Tuesday, it’s better than ever and hosts what must be the best Jazz jam in Southern Thailand, but his dreams of relaunching the Jazz festival have been frustrated until now.

Jeffery originally chose KEP Restaurant near Chalong Pier, a cool seaside restaurant, for the festival’s relaunch in a definite move up-market. However, the venue was changed to the Three Monkeys just before because of impending rain. While Jeffery somehow miraculously managed to keep the festival outside Music Matters free, post-pandemic finances meant it was necessary now to pay for entry. There is just not nearly so much money sloshing around Phuket as before COVID.

Happily, however, Jeffery had a lot of local talent to draw upon and his appeal for acts soon had 11 local bands involving over 40 musicians volunteering. Early acts on stage included The Naughty Band, young Tenly Mulder’s Funky Band and Voodoo Daddy, with Steve Gitz defining its raunchy sound with wonderfully gritty guitar.

Colin Hill sadly had to pull out because of band sickness, leaving Filipino Levi Aniversario to fill the 7pm slot with his all-Thai band, Blues and Soul. Perhaps the best male vocalist singing in English in Phuket, Levi provided a signature energetic performance, backed up with some fine saxophone from Thom Sax.

Next up was Jeffery Sevilla’s own band, The Siam Band, with a small brass section and the solid bass of Filipino Dennis and wonderfully-fluid drumming of Serge Lamboley from France. Filipino Eric Soriano then played a short, soaring solo set with backing drum tracks and a multitude of guitar effects provided by his enormous pedal board, surely the largest on the island.

However, the band of the night just had to be Klaus Zimmermann’s Jazz-Roxx. I’ve watched their first performances at the Coconut Rawai’s open mic nights, but this one confirmed my early opinion of them as Phuket’s most exciting new and upcoming band. Klaus, Germany’s answer to Joe Satriani or Steve Vai, played guitar, sometimes melodic, sometimes snarling, but always stunning. Not only that, he was backed up by two other first-rate soloists with Tom Nunan on sax and Ramil Media-Raw on keyboard. With rock solid bass and energetic drumming provided by Ukrainians Andrew Emilianov and Max Malyshev, this band could not fail to make an incendiary first major performance.

People by now were starting to leave for home, perhaps needing to take kids to school or go to work next day. It was left to Ramil Media-Raw’s Islander Band and Irish Jazz singer Anita Williams to wind up a memorable evening.

I feel I should leave the last word to Jeffery who plans to hold a festival in April next year and maybe even again next November: “I’m so excited to be able to have the festival again, particularly as it now includes Blues. Jazz is a way of life for me, a part of my life, even a part of my personality.”

So well done Jeffery ‒ we’re all looking forward to the next one next year!

Andy Tong Dee is a local expat, musician and live music enthusiast. You can find out more about Phuket’s bands and venues at www.phuketmusicscene.com