PHUKET: A total of 46 couples were married at special events held in Phuket yesterday (Feb 14) to commemorate Valentine’s Day. 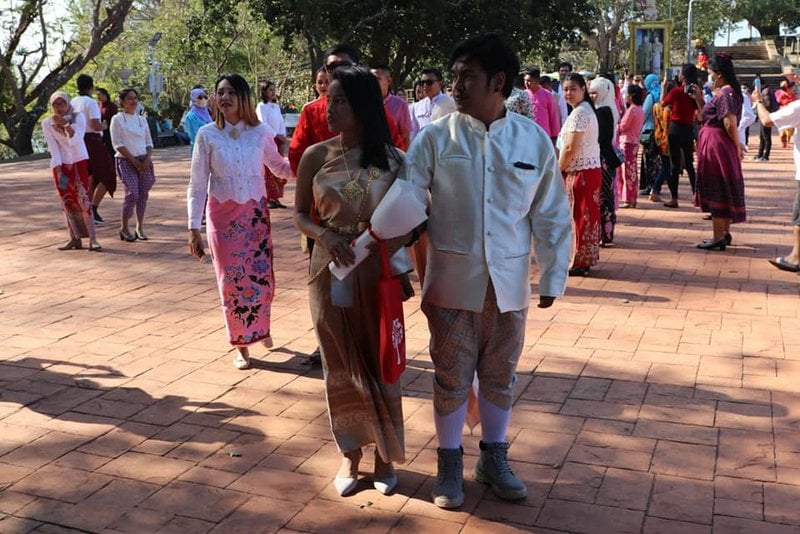 The Muang District Office held its special mass wedding event at Promthep Cape, with its iconic views of the Andaman Sea.

A total of 32 couples were married at the event, which was overseen by Phuket Vice Governors Vikrom Jakthee and Piyapong Choowong, joined by Khenjutha Suwanjinda, Chief Judge of the Phuket Juvenile and Family Court.

The event was held so that couples could register their marriage on the day of love, and realise the importance of their rights and duties to each other as husband and wife, Mr Somprat said.

“It was held to also promote tourism to Phuket,” he added.

The event included a traditional Thai wedding ‘Khan Maak’ procession with two elephants leading the parade of the bride and groom and their wellwishers.

The Muang District Office, as is tradition, offered simple gifts to the newlyweds for them to use in starting their new lives together, and provided a professional photographer.

Meanwhile, further north in Phuket yesterday, 14 couples were married at a special event held at the Thalang District Office.

Of the couples, 12 were Thai, one couple were an Italian and a Thai, and another couple were one French national and a native of Madagascar, an officer at the Thalang District Office told The Phuket News today.

"The special wedding event and all activities were held only at the Thalang District Office, where all COVID-19 preventive measures were followed,” the officer said.

“There was a flower arch for the newlyweds to have their photo taken under and gifts were handed to the couples as well," the officer added.

The Kathu District Office, which also usually holds special wedding events for couples marrying on Valentine’s Day, this year did not hold any special event to mark the occasion.