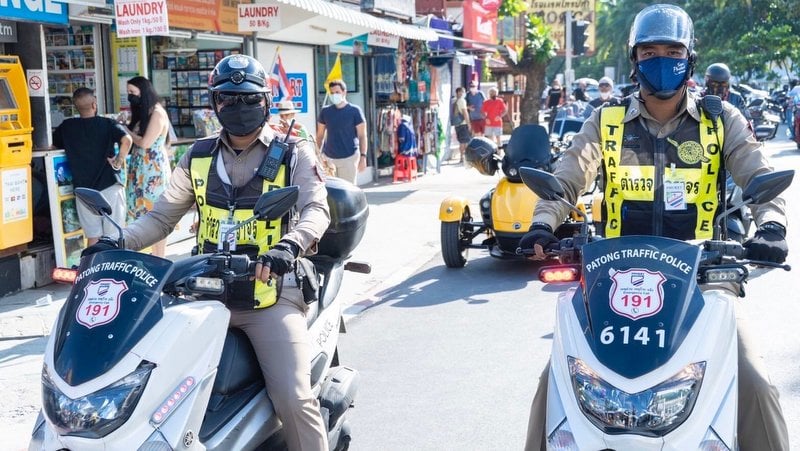 The declaration came at an event held to launch the campaign at the Phuket Provincial Police headquarters in Phuket Town yesterday (Dec 13).

“The project is a campaign for people to be aware of the traffic rules and to reduce the loss of life. In Phuket today, every police station across the island has implemented the project all over Phuket,” Maj Gen Sermphan said.

Phuket Provincial Police Deputy Commander Lt Col Sathit Nurit explained, “Now, road accidents cause loss of life and property, including the economy. Most of this happens with motorcyclists, especially those who do not wear helmets.

“As a result, Pol Lt Gen Amphol Buarabphon, Commander of Provincial Police Region 8, has instructed all police stations under the Provincial Police Headquarters Region 8 to implement such a project. The purpose is to encourage motorcyclists, both riders and passengers to realise the importance of wearing a helmet,” he said.

“This will help prevent and reduce severe accidents that will affect life and body as well as to raise awareness of motorcycle users to respect traffic laws by wearing a helmet while riding a motorcycle,” Lt Col Sathit said.

“A helmet will be given to the offender, and the offender must return the helmet to police within seven days,” he added.

The same scale of fines was explained by Region 8 Police Commander Lt Gen Amphol at the event in Patong, where leading officials signed a Memorandum of Understanding and a procession by big bike riders was held throughout the town.

Meanwhile, Deputy Interior Minister Nipon Boonyamanee yesterday chaired a meeting at the new Phuket Provincial Hall on the road safety campaign to be held in Phuket for the New Year holidays.

Present for the meeting were Phuket Vice Governor Amnuay Pinsuwan and and heads of relevant government departments, including the Phuket Land Transport Office.

Vice Governor Amnuay explained that the campaign will cover three main areas of road safety to be implemented by local officials.

“First are management systems which focus on 100% safe driving and provide effective monitoring systems at all levels,” he said.

“Second are the main risk factors, with the campaign to focus on the wearing of helmets, speeding and drunk driving.

“Last are general risks in the area. This focuses on training people and inspecting the condition of vehicles and roads that pose risk of accidents,” Vice Governor Amnuay said.

“This is the time of year that many tourists come to Phuket,” he cautioned, adding that accidents still occurred in many areas across Phuket.

According to the national Thai Road Safety Council (Thai RSC), 66 people have died and 12,212 have been injured in traffic accidents in Phuket so far this year.

“Therefore, we want each subdistrict and all departments to work together to take care and focus on road accidents, and help publicise the measures to prevent accidents to the public in order to reduce road accidents during the coming New Year season, and during normal times,” Mr Amnuay said.