PHUKET: Phuket Immigration is adding a ‘Drive Thru’ lane at its main office in Phuket Town in the hopes of making it quicker and easier for foreigners to complete simple procedures, including completing the mandatory 90-day reporting required of all foreigners staying on long-term visas. 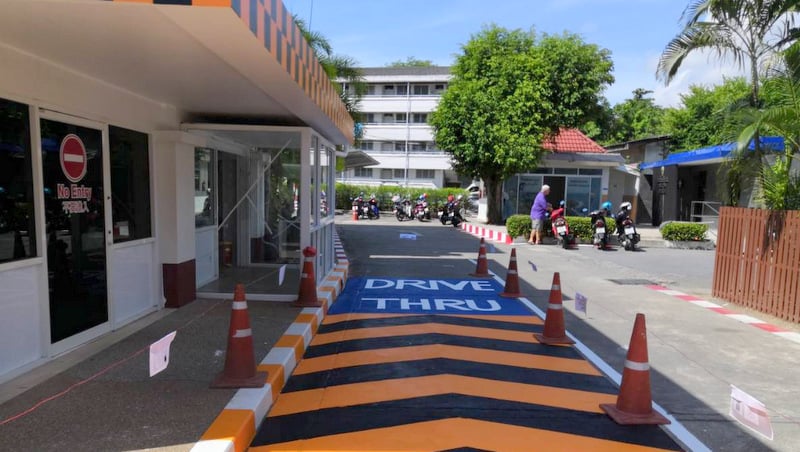 The Drive Thru at Phuket Immigration is to open before the year’s end. photo: Tavee Adam The Drive Thru at Phuket Immigration is to open before the year’s end. photo: Tavee Adam

Phuket Immigration Chief Lt Col Kathatorn Kumthien revealed to The Phuket News today (Nov 14) that he hopes for the Drive Thru lane to be open before the New Year.

“My inspiration for the Drive Thru project is that lots of tourist come to the Phuket Immigration Office in the high season for simple procedures, such as visa extensions,” he said.

“Plus we have limited space in our office, which led me to think about a simpler and faster way of dealing with this,” he added.

Col Kathatorn explained that the Drive Thru will be used for only for processes that are genuinely targetted to take very little time.

“The main process that the Drive Thru will be used for initially is for simple ‘repeat’ 90-day reporting, but I am considering adding other services, such as re-reporting where the foreigner is staying,” he added.

“Which services may be added later are still under consideration, as there are many factors about what is required to complete processes,” Col Kathatorn explained.

Construction of the Drive Thru began last month and has stirred a lot of interest from foreigners visiting the Immigration Office, he noted.

Phuket Immigration Deputy Chief Lt Col Archeep Jaroensuntisuk added that the technical support to make the Drive Thru functional is being rolled out.

“Our system has been changed to make it easier to use, and it should not take a long time waiting in the queue,” he said.

“The Drive Thru lane will make our service simpler and faster, with a smile, sooner,” Col Archeep added.