PHUKET: The Chief of the Phuket Provincial Public Health Office (PPHO), Dr Kusak Kukiattikoon, has assured that the island will not run out of hospital beds to treat and monitor people confirmed as infected with COVID-19.

COVID-19Coronavirushealthimmigrationcrimetourism
By The Phuket News Officals observe a patient at the ’Field Hospital 1’ at the Prince of Songkla University (PSU) Phuket campus in Kathu. Photo: PR Phuket 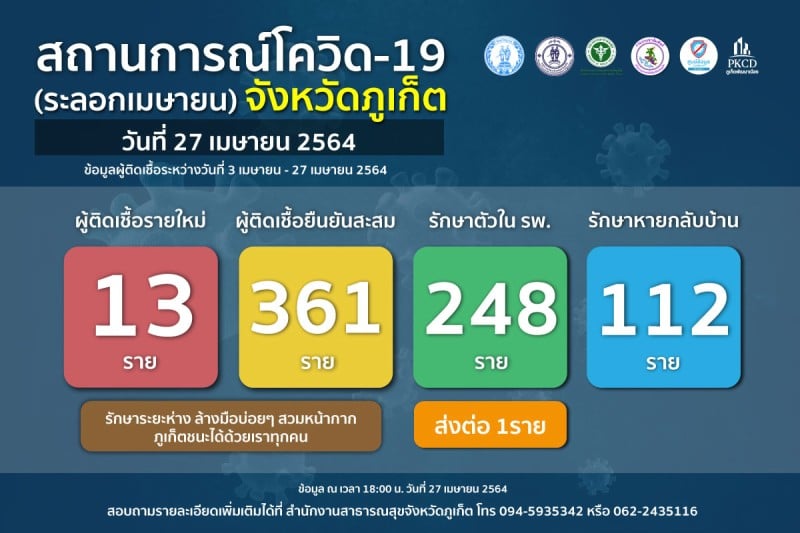 The latest map showing the location of infections across the island. Image: PPHO Five other provinces are now asking their residents to stay at home throughout the night. Image: PR Phuket The Phuket warning that not wearing a face mask in public may result in a B20,000 fine. Image: PR Phuket 65 prvinces are now fining their residents for not wearing a face mask. Image: PR PPhuket More than 50,000 people in Phuket have received their second vaccination injection, reports the Ministry of Public Health. Image: MoPH “So far Phuket has had more than 300 cases, but some of them are now discharged from the hospitals,” Dr Kusak said.

“The Phuket government and relevant officials have checked the readiness of beds for COVID-19 treatment, and we have enough beds for infected cases for sure,” he added.

Explaining how many beds are available at each type of medical facility on the island Dr Kusak continued, “The government hospitals in Phuket have 139 beds, of which 91 beds are now being used and 48 bed are available. At private hospitals, there are 157 beds, with 98 beds occupied and 59 beds available.

“The two field hospitals together have 435 beds. The first field hospital located at Prince of Songkla University (PSU) Phuket Campus now has 170 beds in total and 82 beds are used.

“The second field hospital at Phuket Rajabhat University (PRU) has 265 beds in total, of which none are currently being used,” he said.

The PPHO today confirmed that Phuket recorded 13 new cases of infection yesterday (Apr 27), bringing to 361 the total number of people in Phuket officially recognised as infected with COVID-19 since Apr 3.

The PPHO today also released an updated report of the number of COVID patients receiving treatment at each hospital.

The report, dated as accurate as of 6pm last night (Apr 27), noted that 90 people were receiving medical care at ‘Field Hospital 1’ at the Prince of Songkla University (PSU) Phuket campus in Kathu.

A further 46 people were receiving treatment at Vachira Phuket Hospital in Phuket Town, along with 21 at Patong Hospital and 10 at Thalang Hospital.

The report also notes that 112 people have been discharged from COVID medical care, with one person referred to another facility, which has previously been reported as transferred to Bangkok.

The Phuket Provincial Office today shared a national report by the Ministry of Public Health Immunization Centre showing that so far 94,939 people in Phuket had received their first vaccination injection.

Of those, a total of 50,772 had now received their second injection, noted the report, marked accurate as of yesterday (Apr 27).

Phuket officials have previously, and repeatedly, said that “about 10,000 a day” was the target being achieved in administering vaccination doses in Phuket.

However, Phuket officials themselves have yet to confirm an updated number of completed vaccinations.

So far all state administered vaccination injections in Phuket have been of the Chinese-made Sinovac ‘CoronaVac’ vaccine.

The Phuket ‘Official COVID Information Centre’, operated by the Phuket office of the Ministry of Interior, has posted a slew of announcements concerning COVID-19 for the general public.

Among them is the notice from Phuket Immigration warning foreigners:

“If the Investigation by Phuket Provincial Public Health Office finds that you are a High Risk Contact. Or if the COVID-19 test shows a positive result.

This disease control is standard applicable to tourists and people living in Phuket regardless of their nationality. Offenders will be subject to legal punishment, including consideration of permission to stay in the Kingdom.”

Another notice shared by Phuket officials announced that five other provinces are now asking residents to stay at home at nighttime.

The Phuket ‘Official COVID Information Centre’ also shared a national announcement detailing that 65 provinces are now issuing fines for not wearing a face mask while in public.

“65 provinces in Thailand are now issuing fines for anyone who fails to wear a face mask when leaving their home. The list of provinces enforcing the rules has just been updated today by the Ministry of Interior (Thailand),” the announcement read.

“The mandatory wearing of face masks applies to both indoor and outdoor public spaces,” the notice confirmed.

“Please note that this is a living document, which the PR Thai Government will update as new information becomes available,” it concluded.

Meanwhile, the national Thai Red Cross is asking for all people to “self-screen” before donating blood.