PHUKET: Phuket Governor Norraphat Plodthong has called for new a public hearing to be held on a marina project on Phuket’s east coast after dire concerns have been raised over the devastating effect dredging a channel there may have on an aquatic field of corals nearby. 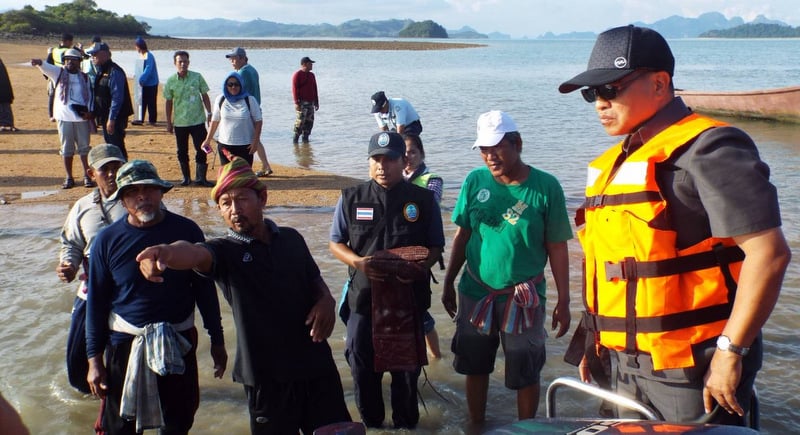 The small isle features so much coral that it is called Koh Hei, literally 'Coral Island'. Photo: Eakkapop Thongtub Pradit Puangket, who is the Phu Yai Baan (Village Chief) of Ban Ao Kung, has campaigned against the environmental impact the marina project will have since its inception. Photo: Tanyaluk Sakoot The entire coastline along the bay is thicketed with mangroves. Image: Google Maps

Governor Norraphat gave the order yesterday morning, before inspecting the corals in person yesterday afternoon (May 16).

Gov Norraphat also ordered Phuket Marine Office Chief Surat Sirisaiyat to investigate the potential damage that may be caused by the dredging and to report in detail about the project, the new B450 million Ao Kung Marina and sports complex in Pa Khlok.

“I have received reports about this case from several officials, and I have been informed that construction of the marina has not yet been approved,” Gov Norraphat confirmed.

“The Department of Marine and Coastal Resources (DMCR) Phuket Office is supposed to know about this situation because these corals are in their area  of responsibility,” he said.

“I agree to hold a new public hearing on this,” he added, in response to requests by local residents concerned about the environmental damage the project may cause.

“Everyone needs to know the truth. All concerned officials must make sure local people join the public hearing,” Gov Norraphat said.

“Right now the project is under consideration by the Office of Natural Resources and Environmental Policy and Planning. The decision of whether or not the project is approved rests with them,” he noted.

A date and venue for the public hearing has yet to be announced.

Of note, the EIA for the marina project was compiled by Enrich Consultants Co Ltd, the same company entrusted with conducting feasibility studies and EIA studies for Phuket’s multi-billion-baht light-rail project.

Also of importance is that the project was met with strong opposition at the second – and last – public hearing held in October last year.

At that meeting, marine ecosystem and resource management specialist Wankiat Thubtimsaeng expressed his concern about the construction of the project in the public’s interest.

“The area of Ao Kung is a very ecological area. As it is located on the east coast of Phuket, the seagrass beds and coral reefs are complete. Shrimp farms have a complete marine ecosystem, and this is the livelihood of the villagers,” said Mr Wankiat.

“During the construction phase, mangroves and water quality will be affected. Sedimentation and sludge diffusion will occur from large ships regularly moving in and out of the bay when the marina starts to get used.

“This will affect the ecology of the area as mangroves, coral reefs and sea grass will all be lost, so this project’s plans must be clear if it is to continue. We must maintain ecological integrity for the benefit of the locals,” he added.

Mr Wankiat also expressed deep concern over the lack of clear information presented on how wastewater was to be managed once the marina was built. (See story here.)

The entire project and the planned dredging of an eight-metre deep channel for boats to access the marina has long been opposed by local residents under the banner of the Ao Kung Bay Conservation Group, led by Pradit Puangket, who has campaigned against the environmental impact the marina project will have since its inception.

Of note, Mr Pradit, who is also the Phu Yai Baan (Village Chief) of Ban Ao Kung, has consistently clarified that he is not against the project itself – if the environmental concerns are addressed.

His main arguments have consistently been that the entire coast in the area is thicketed with mangroves and the area is blanketed with corals – so much so that even the small island in the bay to be directly affected is called Koh Hei, literally “Coral Island”.

The Phuket News on Tuesday (May 15) joined an inspection expedition to the coral site by local officials from the Phuket DMCR office.

Phatpong Romyen, who led the DMCR expedition on Tuesday declined to comment in detail on the project. “We came here to verify the location of the corals and report that back to headquarters. We can’t explain more detail right now,” was all he would say.

However, Pichet Pandan of the Ao Kung Conservation Group, explained, “We want to show this coral reef to the public. Also, we confirm that we don’t disagree with projects for Phuket’s growth. We know that such projects help to improve the standard of living of local residents, but the project really should be in another location.”

Mr Pichet noted that awareness of the project and its likely impact on the immediate environment had been building for weeks with posts on social media “going viral” online.

“However, we still have no clear answer what the next step for project will be. We are afraid that the project will ruin the marine environment. It is very possible that part of mangrove forest along the coast will be cut down, and many corals in the shallow waters here will die off,” he added.

Meanwhile, Village Chief Pradit has had the field of corals roped off to prevent visitors from walking into the area.

“We have hope that the Phuket Governor will realise the need to preserve this area, or that the DMCR will find a way to protect these corals as quickly as possible,” he said.

“We are just local residents here. We want to save it. Honestly, we don’t want to watch as these corals are destroyed,” he said.

While the focus yesterday was on the corals, another sticking point for the project is that in order for it to go ahead, it will require mangroves to be cut down, as the entire coastline along the bay is densely covered with natural mangroves.

As pointed out in the years-long battle to build the Thep Srisin Bridge at Saphan Hin, special permission from the Thai Cabinet itself must first be obtained in order to cut down any mangroves in Thailand. (See story here.)