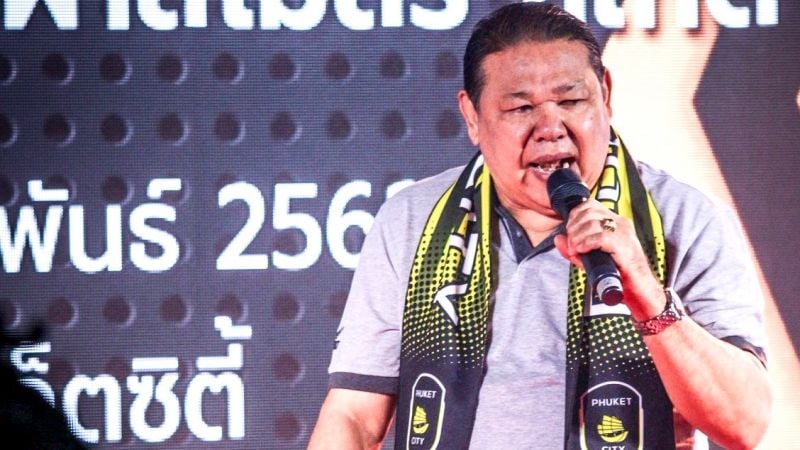 The new president of Phuket City FC, Thummawan Charoenyot, officially launched the club’s 2019 season at the Royal Phuket City Hotel in Phuket Town on Thursday, February 14, where he called on local football fans to get behind the team ahead of their first home game of the season last Sunday (Feb 17) against Krabi FC at Surakul Stadium in Wichit.

“Phuket used to have a football team that was renowned in the country,” Mr Thummawan told an eager audience. “Now the city has no fully professional team and with my position as President of the Phuket Sports Association and the Sports Commission of Thailand, I want to push Phuket City FC back into the professional league where it belongs.”

One of Mr Thummawan’s first moves as the club’s new president was to call on the expertise of Therdsak Chaiman to join the club as the new manager. Therdsak had a successful career as a player and manager at Thai League 1 side, Chonburi FC, as well as earning 75 caps for the national team.

“I am very confident about the team this season,” Mr Thummawan said proudly. “We have foreign players and a great manager and I am confident we will move up to Thai League 2,”.

The club’s first home game of the 2019 season was no easy challenge as it came against Krabi FC who were relegated last season from the second flight of the country’s two professional leagues – Thai League 2. Prior to the match, Mr Thummawan offered the team B50,000 if they were to take three points from arguably one of the toughest opponents in the league.

The islanders were off to a perfect start as new Nigerian signing, Efe Obode, put away a searching ball from the corner spot to put Phuket ahead after 17 minutes.

The lead was short-lived, however, as 13 minutes later fellow new signing, Frank Lionel, tried to dribble the ball out of his own half and was tackled, leading to a swift equaliser by Teerawut Churok.

The first half ended 1-1 leaving all to play for in the second.

As the sun set, the floodlights went on and the teams came out to cheers from both sides’ supporters.

Five minutes into the second half, Phuket’s attacking form earned them a corner which was crossed into the box and quickly cleared by the Krabi defence who wasted no time in sending the ball forward to man-of-the-match, Raphael Manhaes, in a blistering counter-attack. As Manhaes ran at Phuket keeper, Wattanapong Tabutda, he was brought down in the goal area by defender Autthagowit Jantod and instantly awarded a penalty, to little protest.

Krabi striker, Witoon Sukjit, stepped up to the penalty spot and fired the ball into the top right corner, sending the keeper the wrong way.

Krabi managed to hold their lead and the match ended 1-2 as Phuket marked their second loss in two games, leaving them third from bottom in the table, with Krabi in second place after two wins.

Last season Phuket finished fifth out of 14 teams in the Thai League 3 southern region table. The club has been struggling since announcing its termination in November 2017 after it was unable to pay FIFA-issued fines totalling B83 million for contractual breaches relating to three international players.

As the original Phuket City players dispersed, heaps of players were brought in from Chonburi FC on loan and although the ‘new’ club was branded as ‘Phuket City FC’, it was, and still is recognised as Banbueng FC by the Football Association of Thailand (FAT).

Phuket’s next game is at home to Thai League 4 team, Pattani FC, in the first round of the Toyota Thai League Cup on Saturday, February 23 at 6pm. Tickets for the game are B80 and available on arrival at Surakul Stadium.

Phuket’s next Thai League 3 game is away at Grand Andaman Ranong United on March 2.