PHUKET: Police have arrested four suspects for operating a criminal child-exploitation operation in Phuket that forced children as young as 10 years old to work all night selling coconut water in bars and restaurants – or face being beaten. 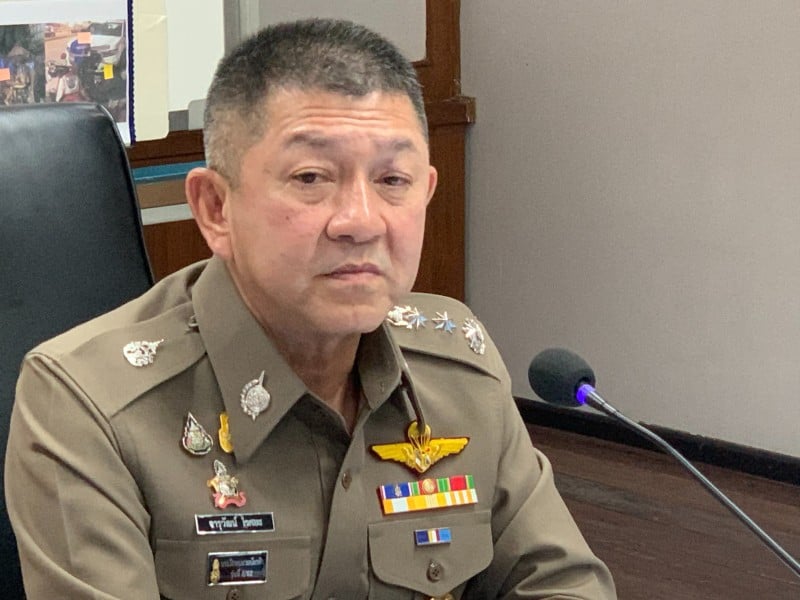 Lt Gen Jaruwat Waisaya, Commander of the Royal Thai Police Office of Legal Affairs and Litigation, travelled to Phuket to announce the arrests at a press conference at Patong Police Station this afternoon (Nov 10).

Present for the announcement were Phuket Provincial Police Deputy Commanders Col Sermphan Sirikong and Col Chaiwat Uikam, who has previously served as the Patong Police Chief, along with the current Patong Police Chief Col Anotai Jindamanee and Kitti Intharakul, Chief of the Phuket Provincial Social Development and Human Security Office, and Atchara Surakul, head of the Child, Home and the Family Affairs office in Phuket.

All four were arrested at their homes in Nakhon Sri Thammarat.

The children explained that if they didn’t they would be beaten, he said.

The children were taken into protective custody and an investigation into the operation was launched, Gen Jaruwat explained.

The resulting investigation saw a complaint filed at the Damrongdharma Center (Provincial Ombudsman’s Office) in Nakhon Sri Thammarat Province and a press conference held accusing the officers for having no right to detain the children and threats to sue the officials involved, he said.

“This became big news, and Prime Minister Prayut Chan-ocha and Deputy Prime Minister Gen Prawit Wonguwan are very interested. They want to clarify the truth and leading officers were sent from Bangkok to carry out the investigation,” Gen Jaruwat explained.

The result was the four suspects being arrested on human trafficking and child exploitation charges against all four suspects.

“At present, the case is in the process of bringing the suspects back to face legal proceedings in Phuket,” he said.

The four suspects collectively face charges of human trafficking acting in conspiracy of three or more people for the purpose of exploitation of child labour of children net yet 15 years old and a separate charge of the same of children over 15 but not yet 18 years of age.

“This cannot be tolerated. We will prosecute to the end,” Gen Jaruwat said today.

“These children were forced to work more than 10 hours a day, and sometimes they were attacked, slapped and beaten,” he said.

“Some of these children had to carry up to 10 coconuts at a time. They had to make B400 a day, all of which was handed over. If they came back late or were unable to sell, they were punished,” he added.

“Operations such as this can generate hundreds of thousands of baht per month. There is a huge profit from the exploitation of children,” Gen Jaruwat noted.

Gen Jaruwat concluded the press conference with a direct order for local police.