PHUKET: Dr Natee Ratchakitprakarn, chairman of the advisory committee to the Deputy Prime Minister, has praised Phuket Bike Week 2022 as an event that successfully stimulated the tourism economy of Phuket and Thailand and instilled confidence among both Thai and foreign tourists to travel to the island. 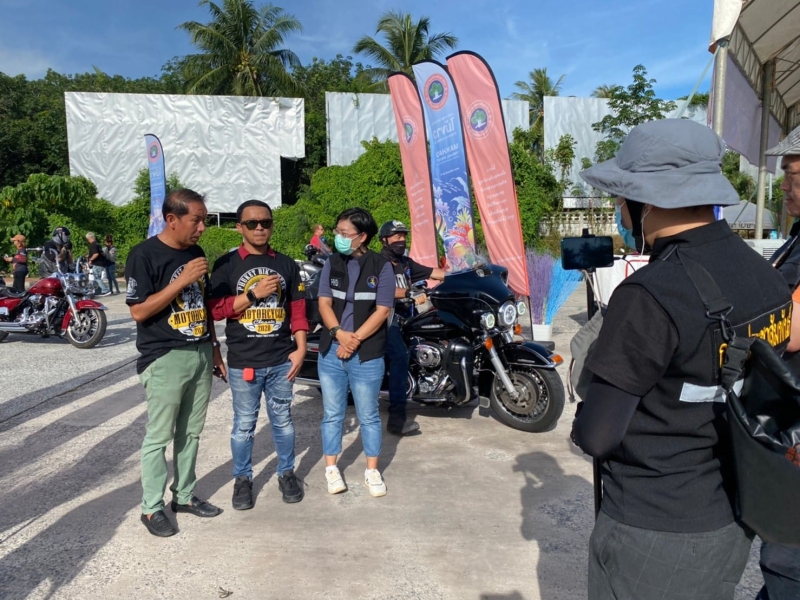 The three-day event, which drew to a close last night (May 15), attracted an estimated 20,000 visitors, with some 2,000 vehicles in total taking part, altogether generating some B200 million for the island’s economy.

Coming from afar to join the event were big bike enthusiasts from all regions of Thailand as well as Singapore, Malaysia, Japan, Cambodia and Vietnam.

This year marked the 26th edition of the annual event, which this year was held under the theme “New Normal Ride Together”, and collectively under the banner of helping the island’s battered tourism industry to recover.

The event was jointly supported by the Ministry of Tourism and Sports, with Tourism MInister Phiphat Ratchakitprakarn attending the event’s press launch last month in person.

Wittaya Singkala, Acting President of Phuket Bike Week Association, explained at the official opening ceremony on Saturday at The PlayYard Phuket in Mai Khao, the home for this year’s Bike Week festivities, that the event aimed “to focus on promoting tourism with diversity, creativity and ready to convey the culture of the people who are happy, love big engines”.

“People can travel here to see the beauty of the sea, the beautiful beaches of Phuket, while enhancing quality tourism and elevate the area as a world-class tourism destination.” Mr Wittaya said.

The target group of big bike riders was one of high purchasing power, happy to spend on activities they enjoy, Mr Wittaya added.

“These types of tourists with high spending power are what’s needed to stimulate tourism after COVID-19,” he said.

Also present at the official opening was Phuket Vice Governor Pichet Panapong, along with people from many walks of life, including representatives from local government agencies in Phuket.

“The event promotes the area as a world-class tourism hub that connects both sea and land tourism as one. The event also strengthens friendships and good relations between tourists who love big motorbikes from all over the world. This is another activity that can stimulate the tourism business of Phuket to recover stable and strong in the long term,” V/Gov Pichet added.