PHUKET: The Department of Marine and Coastal Resources (DMCR) has ordered Karon Municipality to move its incomplete seawall – under construction to counter coastal erosion at the popular tourist beach. 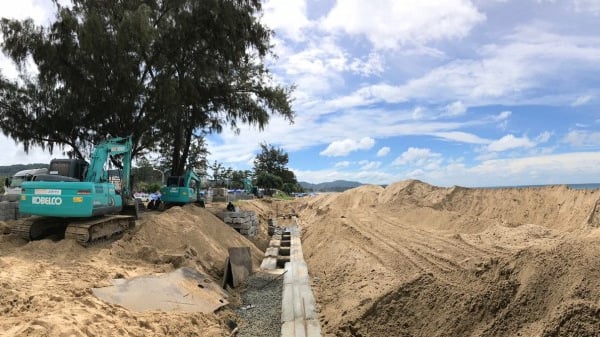 The municipality has been ordered to move the wall to behind the line where the sand meets the land at Karon Beach.

The order was issued by the DMCR national Director-General Jatuporn Buruspat in a public statement yesterday (Nov 22).

“I was told that the wall is being built actually on the beach, so on Wednesday I ordered Pran Dilokkunakul, Director of the DMCR’s Coastal Area Management Division, to investigate,” Mr Jaturporn said.

Also present for the inspection were Muang District Chief Wikrom Jakthi as well as officials from the Phuket Marine Biological Centre (PMBC) officials and Karon Municipality.

Mr Jatuporn explained that the wall – planned to be 470 metres long when completed – currently stretches about 280m along the beachfront.

“We understand that the aim of having the wall is to preserve the landscape of Nong Harn (lake) at Karon, and that the wall will protect against beach erosion,” he said.

However, Mr Jatuporn added, “The DMCR officials and experts present agreed that no buildings or other forms of construction should be beyond the coastal line.

“The wall must be moved to behind the coastal line. If the wall is not moved, it might cause unintended long-term changes to the beach,” he said.

Wanchai Saetan, Public Works Chief at Karon Municipality, told The Phuket News today (Nov 23), “We understand the order given by the DMCR and there will not be any problems.”

However, he added, “We will follow their advice (sic) and move some parts of the wall project, but not whole project.”

Mr Wanchai declined to comment further today, but said he would be available later to fully explain the municipality’s position on order.

The seawall, being built at a cost of B22.4 million, has already encountered problems with other officials.

Construction of the wall was ordered to a halt in December 2016 as Karon Municipality had not obtained the proper approval of the marine Department. (See story here.)