PHUKET: A “high risk” warning has been issued for all people who travelled in a passenger van from Phuket International Airport to various locations on the island on Apr 15. 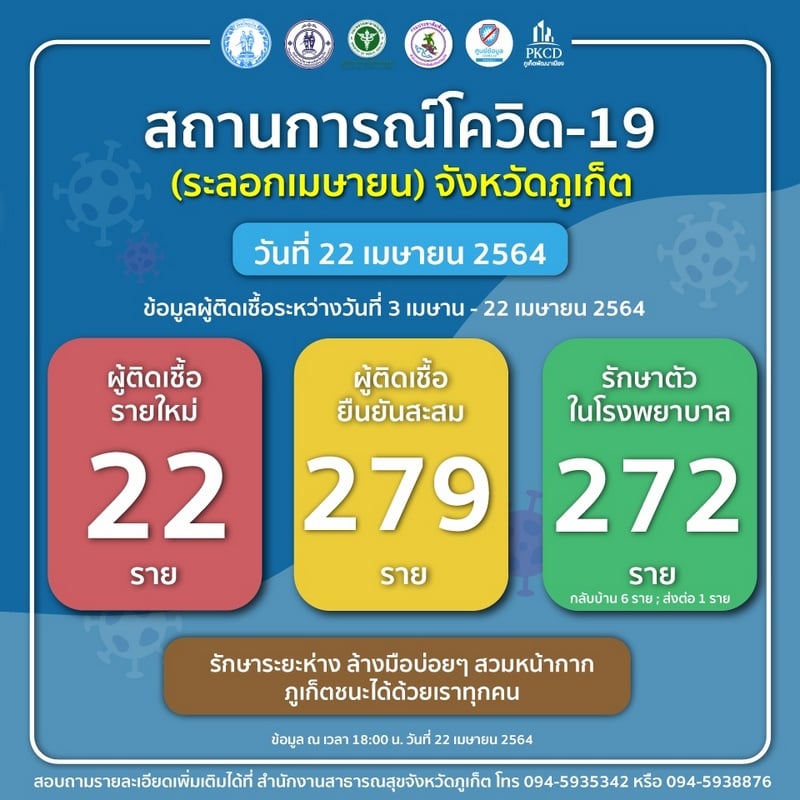 The warning urged any persons who travelled in a passenger van from the airport from 8:30pm to 9pm to contact the Phuket Provincial Public Health Office (PPHO) by calling 094-5938876 “because you are a high risk person”.

The passengers travelling in the van were dropped off at various locations, as follows:

The warning came as Phuket Vice Governor Pichet Panapong yesterday (Apr 22) confirmed that the PPHO had identified 22 new confirmed infections on the island, bringing the total number of officially recognised infections in Phuket during the current outbreak to 279 cases.

Of those, 272 people were currently under hospital care, six had fully recovered and been released from hospital care, and one person had been transferred to Bangkok for treatment.

V/Gov Pichet yesterday repeated in detail the requirements for all people entering Phuket, and the rapid tests now being used at the airport and at the bridge onto Phuket.

Meanwhile, the PPHO continues to post timelines of movements of people now confirmed infected with COVID-19. Among the latest timelines released are the movement details of a 20-year-old Icelandic national found infected in the Soi Ta-iad area of Chalong (case 240), and a Kazakhstan woman who had just traveled from Bali who had frequented venues in the Nai Harn area (case 238).

Following an infected person being reported as visiting the Central Phuket shopping mall on Apr 10, the mall’s management team have announced that the entire mall has undergone a “deep cleanse”.

“From Apr 10 on, we were reported that an infected person had come to our department store and visited nine places, including SFX Cinema, MK restaurant, Hai Di Lao, Fuji Restaurant, Sukishi Buffet, H&M, Mr DIY, Adidas, and Stabucks,” said the announcement.

“Staff in the cinema and shops that had contact with the person have all tested negative,” the announcement continued.

“For the news that an infected person came and  worked on gardening in our store, we already ordered high risk people to take a test, and all of them tested negative,”  the announcement concluded.