PHUKET: Tourists finally returning to Phuket has been underway just days since the Phuket Sandbox reopening last Thursday (July 1) and already airport taxi prices are causing concern, with Phuket Land Transport Office (PLTO) Chief Banyat Kantha responding with a public statement about how much taxis from the airport should cost. Registered Phuket tour guide Mr Nattakorn is concerned over the effect the fares taxis are charging will have on inbound tourists. Photo: Eakkapop Thongtub 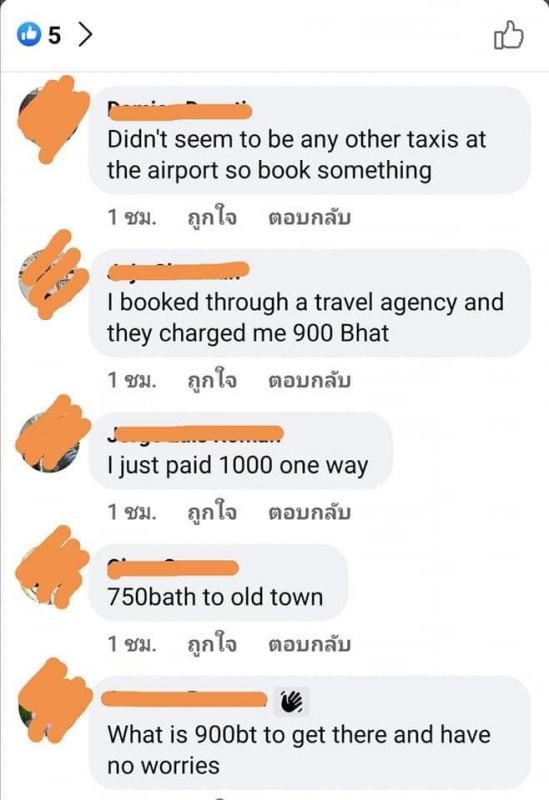 Mr Banyat in a post online ‒ in Thai language only ‒ confirmed that the taxi fare of B900 from Phuket International Airport to a hotel in Patong was an old rate.

His response came after a post online about the taxi fare started going viral, even among the Thai community.

Mr Banyat specifically responded to a Facebook post by Nattakorn Ruengroj, a registered tour guide who operates his own tour company in Phuket, posing serious questions about the fares being charged by taxi drivers in Phuket.

“If you can [charge] do less, please do. To all operators in the tourism industry. The first group of tourists is our leading actors and actresses in our Phuket tourism advertisement that they have to pay for us. If the taxi fare is overpriced, who will help us? #donotruinourreputationbysameoldproblem,” he wrote.

Mr Nattakorn told The Phuket News yesterday (July 4) that he was shocked after seeing the post by the foreigner about the taxi fares.

“I do not want to use the word ‘take advantage’, but the fare is overpriced for this situation. When the pandemic first came, they could reduce the fare to B400 for [fares from the] airport to Patong. Why don’t they think of the tough time?” he said.

“Some of the tourists were invited to come to promote Phuket tourism. If they are not satisfied and post about their negative experience, what will we do? Will tourists want to come if they are taken advantage of like this?” he asked.

“Tourists come to Thailand because of our great hospitality, delicious foods and beautiful nature which is different to their home countries,” Mr Nattakorn said.

“I want to remind operators to think of Phuket as a priority. Do not take advantage of tourists in this situation. You know well what you are doing,” he concluded.

The post Mr Nattakorn shared was a screenshot of another post, saying, “Quick Question. My hotel wants to charge me 900 baht one way from the airport to Patong, the what I would call first side when you come down the hill into town, Holiday Inn Express. I know in the past I have not paid that much to get to Patong, same hotel, and I see some people paying 700 through their hotel.

“Wondering if we can just get the SHA+ ride at the airport and has anyone done that and knows the prices from the airport independent of the hotel?” the post asked.

Mr Banyat explained that PLTO officers had checked the post and found that the foreigner who made the first post had not yet come to Thailand but was scheduled to arrive on July 14. The tourist has stayed at the hotel several times before, Mr Banyat said.

Mr Banyat noted in his response, “However, there is no law setting for taxi rate fares, we asked taxi drivers of the two companies at the airport.”

The explanation is intended to mean that there are no laws regulating the fares charged by taxi drivers operating out of Phuket airport under a concession with Airports of Thailand. The fares charged are set by negotiation, both between the taxi drivers and AoT in setting a general schedule of fares deemed acceptable to the two parties, and by negotiation between the drivers and their passengers.

“A driver of the Phuket Mai Khao Sakhu Co Ltd [identified by the initials ‘P.M.K. on the sides of their vehicles] about the fare and were told that before this they charged B800, but from the middle of last year they have given 20% off discount, or charged about B640 for [trips from] the airport to Patong,” he said.

“A driver of  the Phuket Limousine and Business Services Cooperative [PBC] told us that the company will have a meeting on July 5 about giving discounts for tourists under the Phuket Sandbox scheme,” he added in his post last night.

The Phuket News interviewed Mr Banyat this morning, but he would only reiterate what was explained in his post, which went live online at 9:46pm last night through the Phuket office of the Public Relations Department.

“Nowadays, the taxis with green license plates which operate out of the airport areas can be called for service by the ‘Hello Phuket’ app. A total 675 taxi drivers have registered and joined the app. The fare is set according to the taxi meter rate as announced by the Ministry of Transport,” he said.

The Phuket News notes that the ’Hello Phuket’ app refers to only one transport company in Phuket (see here and here).

Mr Banyat also did not comment on any of the other comments by foreigners posted with the initial post about being charged B900.

The comments confirmed that foreigners were still being charged a variety of different fares, even for journeys of the same distance.

“Didn’t seem to be any other taxis at the airport so book something,” one foreigner wrote.

“I booked through a travel agency and they charged me 900 Bhat,” said another.

One foreigner reported, “Mine 1350 baht to Kata Noi beach one way from the airport” while another confirmed, “In normal situation 600 baht to Kata”.