Today (Nov 17) Mrs Basshaya Yaipiem PR Phuket led 40 representatives of the Thai and foreign media on the “Pakarang” boat of the Department of Natural Resources and the Environment to watch the Phoenix recovery operation.

accidentsmarine
By The Phuket News 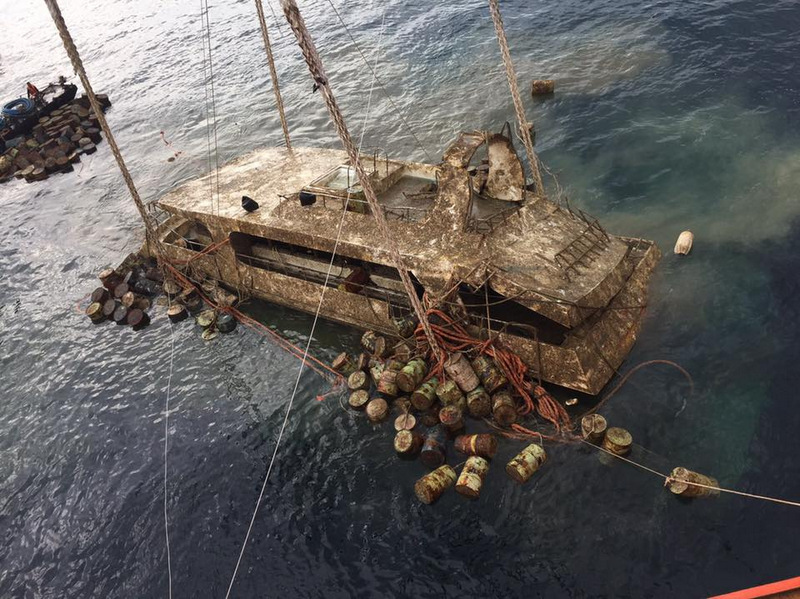 Then, at 2pm, Gen Rungroj Saengkram, along with Maj Gen Surachet Hakparn, came to a press briefing to advise on the progress of the recovery of the Phoenix to the Thai and foreign media.

At the conference room, Mr Li Chun Foo, the Deputy Chinese Consul-General in Songkhla, and Director of the China Consulate-General in Phuket, represented Mr Lyu Jian, China's Ambassador to Thailand, came to listen to the progress of the Phoenix ship recovery.

Gen Rungroj said of the progress of the salvage operations that the staff had used a sling and underwater equipment to pull the boat up to the level of one metre below water. And then a team of engineers and divers checked the condition of the boat. Once the vessel was agreed to be in an acceptable state, it was raised a further 30 centimetres before being checked again.

Once ready, the boat was finally pulled to the surface.

At each stage the emphasis was on maximum safety to the recovery team. No other personnel were allowed to enter into an area of 1km around the site. For transparency, each stage of the operation was captured on video by the Singaporean team.

Maj Gen Surachet said the Thai and Chinese officials had a close relationship. Establishing the cause of the sinking is what the government now deems of great importance in order to heal and show sincerity to relatives of those who died from this incident.

The Phoenix boat is an important testimony to be used as a source of information on the causes of the accident, the impact on the country and the tourism industry of Phuket.

Maj Gen Surachet and the recovery crew members mourned the deaths of the 47 dead, as the Phoenix wreck rose to the surface.

Once the Phoenix is in a state to be moved a 34 metre tow boat will tow the Phoenix to Rattanachai shipyard. The forensics team and experts from foreign countries will then conduct a detailed inspection of the ship.

Gen Rungroj said that on this Monday and Tuesday they will inspect the boat’s structure closely to find information and evidence to understand that the boat was properly constructed in accordance with regulations. This evidence will be presented to a court. The results of the legal proceedings will depend on the information the experts gather from examining the vessel.