PHUKET: A 43-year-old man from Phang Nga has died after suffering chest pains and a heart attack on Monday night after receiving his first Sinovac COVID-19 vaccination injection at Phuket airport on Sunday (May 23). 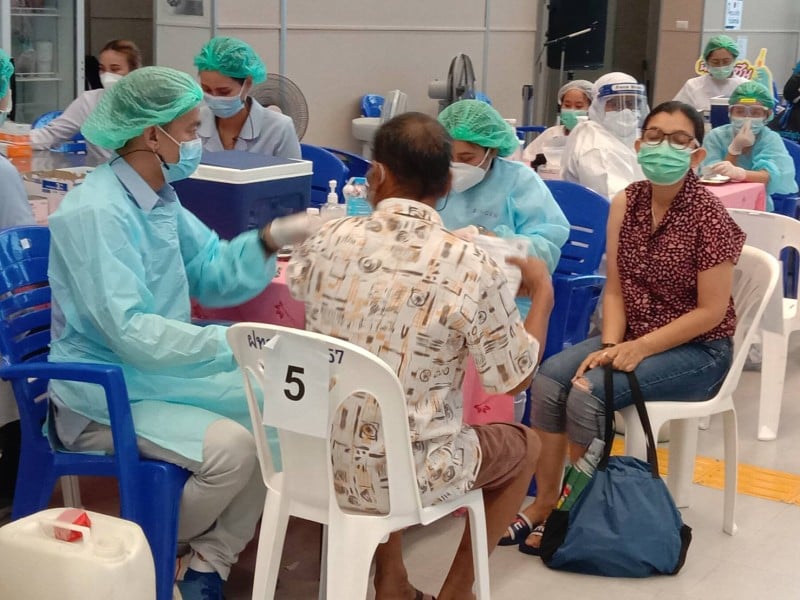 Phang Nga health officials yesterday said they were continuing their investigation into the man’s death.

However, the family had already requested the man’s body be returned so that he could be buried in accordance with Muslim funeral rites.

Samples taken from the man’s body are to be examined through laboratory tests and experts from the Epidemiology Division, Department of Disease Control, had already arrived to assist the investigation, they said.

Phang Nga health officials are also coordinating with the Phuket Provincial Public Health Office (PPHO) to investigate the details of the vaccine that was injected, they added.

Dr Peerawit noted that another man had been admitted to Phang Nga Hospital after receiving a COVID vaccination injection. The man, 52 years old, already suffered from high blood pressure, he said.

The first symptom identified was that the man was weak in his left leg. An X-ray examination and blood tests have found nothing abnormal, so the man is to undergo an MRI examination at Surat Thani Hospital today (May 26), he added.

“We will proceed with determination to identify the cause of death as soon as possible by questioning witnesses as well as [considering] the results of laboratory examinations,” he said.

“In addition, we will investigate the vaccines administered to the deceased and those with side effects, and further detailed studies will be conducted with the relevant departments at the district level, and the ministry will send this information to the Central Vaccine Committee to continue their investigation,” he added.

“For people who have registered to receive the vaccine, do not be afraid. If you have a medical condition or suffer anxiety, please consult a doctor or health worker at a public health facility near you,” Dr Wiset said.

The trio of Phang Nga health officials yesterday confirmed that so far the primary cause of death of the 43-year-old man has been attributed to “acute myocardial infarction” (commonly called a heart attack) and that “fatal medical conditions” had been identified.

Ms Poranee said that her husband woke in the middle of the night suffering severe chest pains.

He was rushed to Phang Nga Hospital, where medical staff worked urgently to try to save his life, but were unable to, she said.

Ms Poranee said that doctors had given the cause of death as a heart attack, but that she and her family believed that the cause of death was more likely from the COVID-19 vaccine because her husband had received a vaccination injection just one day earlier.

Ms Poranee said that her husband was a healthy person and liked to play sports, but also said that he had high cholesterol.

“Before the injection he was anxious and his blood pressure had risen. He had to wait about an hour after the injection [before being allowed to leave] and he returned home to Phang Nga on Monday morning,” Ms Poranee said.

“He had a mild fever, and he took some medicine and even drove to deliver products to Phuket. When he came home, he still had a mild fever and was feeling exhausted,” she added.

“In the middle of the night, he said he felt that he was very hot. He asked why he was so hot, and he told me to read the post-vaccine advice about what it was, and then he said that his chest was sore on the inside.

“He was frightened and hurried to call his relatives to take himt to Phang Nga Hospital, but when he arrived at the hospital, doctors said that he had no pulse and that they had worked for almost an hour to save his life,” she added.

“We are confident that the cause of death is definitely due to the COVID-19 vaccination,” Ms Poranee said.

“The doctors asked if his body could be taken for a thorough autopsy. However, the family did not wish this because the body has to be taken for Islamic rituals,” she added.

Phuket officials have yet to publicly recognise Mr Winai’s death.

Meanwhile, officials, community leaders and administrative staff responsible for organising the mass vaccination rollout at Phuket airport told The Phuket News yesterday that they had not heard of news of his death.

Worawit Sisakukham, Village Headman of Moo 6, Baan Mai Khao, stationed at the vaccination area at the X-Terminal building, said that much of most people’s concerns yesterday were still focussed on people from outside Phuket being allowed to receive a COVID vaccination in Phuket.

“Everyone must be compassionate because the vaccine in Phuket is limited,” he said.

“In the past, Phuket allowed everyone to register for vaccination freely [not true ‒ Ed], but there was a problem with some people coming to Phuket to be vaccinated. Many who travel by private car come to register and secretly mixed with Phuket people to be vaccinated along with large groups,” he said.

Following provincial officials suspending the vaccination of people not registered as living in Phuket, the number of people arriving to be vaccinated at the airport had fallen, he noted.

“It was very effective because normally at least 2,000 people a day would register to be vaccinated here, but after the announcement the number of people fell to about 1,000 people a day,” he said.

Mai Khao Tambon Chief (Kamnan) Olean Maliwan said that people had expressed concern about one foreigner who did not live in Phuket but regularly travelled to the island for business had been granted permission by officials to receive a COVID vaccination even after the latest announcement.

Regardless, some people at the airport vaccination centre said they only wanted to focus on allowing Phuket to reopen to receiving foreign tourists from July 1.

One woman, who asked to be called only “Nang Ying”, said that many people felt the same.

“I want to get vaccinated because I want Phuket [officials] to open the island as quickly as possible so that everything will be back to the same. Tourists will return to Phuket to improve the economy of Phuket,” she said.

All people who The Phuket News spoke to at the airport yesterday said they were not afraid of receiving their vaccination injection, saying it was neither scary nor painful. There may be a slight pain like a normal injection, was the common consensus.