Perez wins after Verstappen and Hamilton fail to score

Perez wins after Verstappen and Hamilton fail to score

FORMULA ONE: Sergio Perez won a dramatic Azerbaijan Grand Prix yesterday (June 6) after one of Max Verstappen’s tyres blew up from the lead of the race with five laps to go. 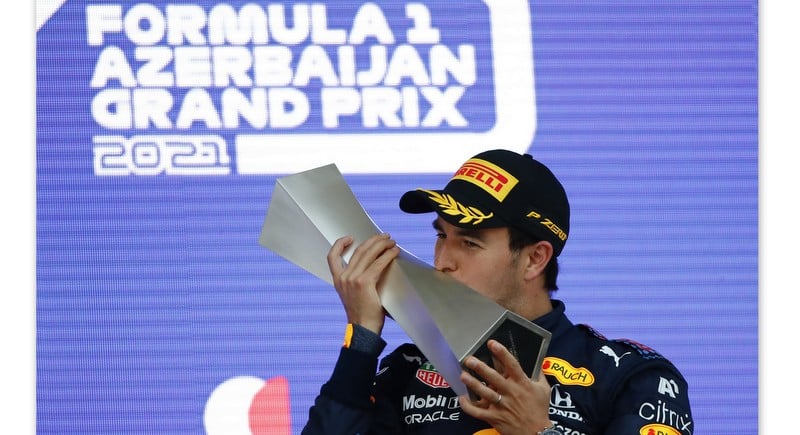 Verstappen was on track for a comfortable victory when his rear-left tyre gave way while travelling at 315 kilometres per hour on the start-finish straight.

It wasn’t immediately clear what caused the failure, but Aston Martin driver Lance Stroll suffered a near identical collapse in his rear-left Pirelli earlier in the race.

Both drivers were unhurt, the damage to their cars relatively limited despite their speed.

Perez inherited the lead, with Lewis Hamilton in second and Sebastian Vettel in a strong third, but the race was suspended to clear the track and allow all drivers to change tyres as a safety precaution.

Just two racing laps remained, and at the standing restarting it was Hamilton who got the better launch to move ahead of Perez into the first turn, but the Briton locked up his front tyres when he hit the brakes and had to take to the run-off zone.

The entire field had passed by the time Hamilton turned the car around and rejoined, and he finished the grand prix 15th and without points.

Mercedes principal Toto Wolff later explained Hamilton had accidentally entered a brake warm-up mode - an unbelievable stroke of luck for Verstappen on an otherwise unlucky afternoon, allowing him to maintain his four-point lead in the title standings.

But the race wasn’t over for Perez, who had to manage a potentially terminal hydraulic problem for the final two laps to claim his first Red Bull Racing victory, making it to just over the finishing line before he was forced to park his car.

“First of all, I have to say I’m very sorry for Max, because he did a tremendous race and deserved the win,” he said. “We were closed to retiring the car, but luckily we managed to finish the race.

In Hamilton’s place rose Sebastian Vettel, who was already one of the afternoon’s strongest performers. The German started 11th on the grid but ran a different strategy to run net sixth in the second half of the race.

He picked up two places with some sweet passes on Charles Leclerc and Pierre Gasly at the safety car restart after Stroll’s crash before inheriting second from Hamilton, his best finish in almost 20 months.

“We had great pace, that was the key,” Vettel said. “I’m over the moon. I think for the team it’s great.

“Obviously a podium - we didn’t expect that when we came here.”

Gasly finished third for AlphaTauri after a frenetic two-lap sprint dicing with Leclerc and Lando Norris, losing the podium place on the penultimate lap before reclaiming it with corners to spare.

“Honestly, I don’t really know what to say,” he said. “It was such an insane race, a super intense last two laps.

“The car’s been incredible all weekend…I didn’t know if we could keep that position and fight for even a podium, but in the end we did it.”

Leclerc and Norris finished fourth and fifth ahead of a fast-finishing Fernando Alonso. The 39-year-old was out of the points for most of the race and took to the restart grid 10th, but he made up a phenomenal four places in one lap in his best finish of the season.

Japanese rookie Yuki Tsunoda finished seventh in a pleasingly clean race after crashing at the end of qualifying on Saturday, although his loss of two places in the final two laps and mid-race radio outburst will have soured the result for AlphaTauri.

Daniel Ricciardo finished ninth with two point for McLaren, and Kimi Raikkonen completed the top 10 for Alfa Romeo ahead of teammate Antonio Giovinazzi.

Valtteri Bottas put in a shocker of a race to finish 12th. The Finn had been less comfortable in the car all weekend relative to Hamilton and started a lowly 10th, and he slipped inexorably backwards through the afternoon.