Penguins soar to victory in series opener at the ACG

Penguins soar to victory in series opener at the ACG

CRICKET: After a thrilling series between Rest Of World and Asia, the island’s club teams, Patong Penguins and Thalang Cows, revived their rivalry and locked horns once again last Sunday (Mar 14) to begin a best-of-five match series at the ACG. 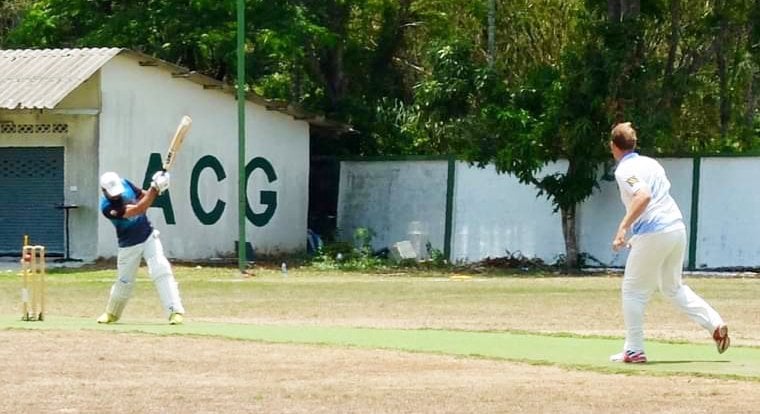 Patong captain Jason Robertson taking his third wicket during the series opener against Thalang on Sunday at the ACG. Photo: Michael Way.

Following several successful run chases in recent games, it was no surprise when Penguins’ captain Jason Robertson elected to field first after winning the toss. Knowing his side would need a strong start, Cows’ captain Joe Ninan sent the in-form Jeremy Bootsy and the ever entertaining Sami Pir to open the batting.

With both sides looking for a positive start to the game and indeed the series, it was Patong who landed the first blow from the very first legal delivery of the match.

As expected Bootsy looked to take the attack to opening bowler Robertson as he latched onto a wide delivery outside off stump only to pick out the alert Eddie Chataway in the covers, who made no mistake with the catch, thus ensuring Bootsy had to depart with an unfortunate platinum duck to his name.

Paul Evans joined Pir at the crease with the latter now on the counter attack smashing three consecutive fours in the second over. The pair added a much needed 34 runs after the disastrous start before Sajal Gaur removed two of Evans’ (7) stumps for good measure.

Next in was Imityaz Mushtaq, who looked to rebuild the Cows’ innings. If Imtiyaz was watchful and steady, Pir was anything but at the other end. Testing out the theory of “attack being the best form of defence”, Pir continued to exasperate the Patong bowlers and reached his 50 in the 15th over.

With the partnership now standing at 79, Robertson turned to Chataway to find the breakthrough. Confident from his earlier catch, the youngster duly obliged as Mushtaq (31), looking to up the tempo, edged one behind into the gloves of wicket-keeper Michael Flowers.

With his side still well short of a competitive total, a big score would be needed from the captain as Ninan joined Pir in the middle.

Looking to be positive from the get-go, the pair punished any loose deliveries and took advantage of some sloppy fielding, much to the annoyance of the Patong bowlers.

With a much needed drinks break approaching the pair would have been looking to refresh and regroup with the score now reading 150-3. However, in the 20th over, Livermore wrapped Ninan on his pads plumb in front of middle stump, thus leaving the umpire no option but to raise his finger signalling the end for Ninan (20) and a timely wicket for both Livermore and Patong.

Post drinks saw Stuart Hamilton come and go in the same fashion as his skipper, trapped in front by a swinging Seemant Raju delivery in the first over after drinks.

After surviving several scares earlier in his innings, Pir was still at the crease and approaching his century milestone. Unfortunately for this cat however his lives had expired by the time Saju Abraham and Flowers (caught) combined to remove the Cows’ opener for an excellent 89 in the 26th over.

With the score on 187-6 and 10 overs still remaining, Sameer Khan took on the responsibility of getting his side above 200 and posting a reasonable score. Using his experience, Khan managed to face the majority of the remaining deliveries in the innings, eventually finishing on a measured 55 (not out) from 50 balls faced, ensuring his side batted out the allotted 35 overs to post a below par, but defendable 256 all out.

Swart piles on the runs

After the players had refreshed and enjoyed lunch at the Tipsy Cow, the sides took to the field once more.

Looking to get ahead of the rate early, openers Raju and Flowers looked to play aggressively and the runs began to flow freely before Pir pounced on a Flowers (19) leading edge from an Imtiyaz delivery in the 5th over. Imtiyaz struck again in the 7th over removing Raju for 13 runs.

Aiming to build on the tempo set by the openers, Patong run-machine, Justin Swart wasted no time in getting in on the runs smashing a boundary from his first ball faced. After Mayur Deuskar had Paul Judge (2) caught behind by Bootsy in the 10th over, Swart was joined in the middle by Shilash Sharma. The pair added 48 runs before Mayur struck twice in the 16th over. Sharma was the first to go after an excellent diving catch was taken in the covers by Hamilton before Chataway was trapped LBW without troubling the scores.

Patong captain Robertson was the next batsman at the crease with the game finely poised at 134-5. Both sides will have felt they could draw first blood in the series at this stage. However, after some wayward bowling that included 17 extras and saw Ninan being removed from the attack due to dangerous bowling, the score had moved onto 193-5 by the scheduled drinks break.

Soon after the drinks break the Cows’ mood was lifted significantly when they finally removed the thorn in their side. It was Mayur on target again having Swart (82) bowled in the 22nd over.

With plenty of overs remaining to score the required runs, both sides knew wickets were the key as the Cows’ bowlers kept searching.

Livermore joined Robertson in the middle as the pair looked to steadily chip away at the remaining 55 runs. The pair had added 33 before Pir had Livermore (16) caught behind in the 26th over to leave the door open for an unlikely victory with Patong still 22 runs short of the target.

However, the contest would soon be over as Dom Judge (5 not out), who showed great composure once more, and Robertson (52 not out) got their side over the line with the latter bringing up his half century from the final ball of the innings.

The series now goes on hold with Patong Penguins 1-0 up in the best of 5 match series.

This Sunday (Mar 21) sees a David and Goliath clash at the ACG as the Dwarves look to topple the Giants in game one of the best of three series.