CRICKET: After 70 overs of cricket at the ACG last Sunday (Jan 31), the second game in the challenge series between Patong Penguins and Thalang Cows went down to the very last ball to decide the result. 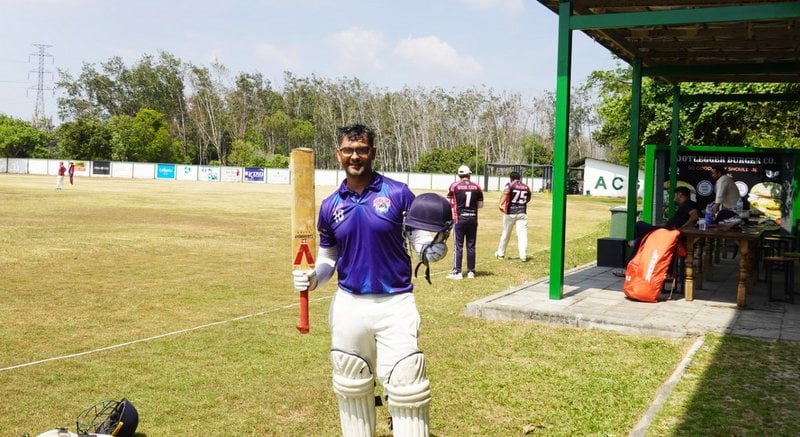 Justin Swart celebrates his unbeaten 112 and victory for the Penguins against the Cows last Sunday (Jan 31) at the ACG. Photo: Karnthida Vongsakul. 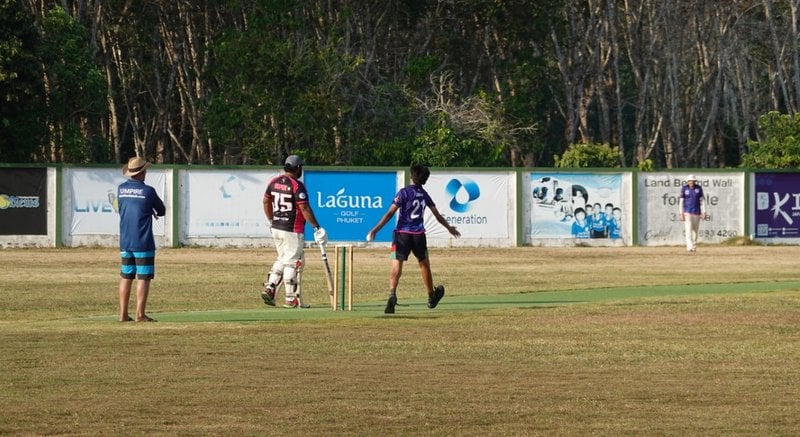 Dom Judge in action, bowling for the Penguins during their series win against the Cows at the ACG last Sunday (Jan 31). Photo: Karnthida Vongsakul.

ACG’s outfield had received a shearing, meaning runs should flow on a hard surface that fielders would learn as unforgiving, and following last weekend’s heated encounter, a competitive tie was highly anticipated, and duly provided.

The Penguins opening partnership of Michael Flowers and Saju Abraham was to last just eight balls, when Cows’ Sami Pir opened his bowling figures with a wicket-maiden, having Abraham caught by Waseem Yusa at mid-on.

Joining Flowers, Paddy Ledeboer made his presence felt immediately in hammering 12 runs from his first over, while the pair took the score to 44 for 1.

Taking the ball for the eighth over, Stuart Hamilton’s left-arm slow spin fell both batsman and provided one of the game’s several great catches.

Hamilton’s first delivery saw Flowers find Ashan Fonseka at long-on, having earlier suffered at the Sri Lankan’s pace. Ledeboer then holed out to Michael Thomas in the covers, holding on to a rasping shot that ricocheted off his up-stretched hands, but reacted quickly to secure on the second attempt. As a shocked Ledeboer departed, he would have also been surprised to learn that with the score reading 48 for 3, he had contributed 40 runs (from 21 balls).

Success at the middle has been weekly routine for Justin Swart, excusing a mid-week experience where a double-play rule ended another promising innings early. But Swart was to obliterate that memory by claiming another century on his way to an unbeaten 118.

Hammering 16 fours and four sixes during his onslaught of the Cows’ bowling, Swart was assisted by Seemant Raju and Dan Nicholson, both adding 18, while Curt Livermore and skipper Jason Robertson threw in 12 and 15, respectively.

By the time Swart was given out, caught behind by Jeremy Bootsy off a Sami Pir delivery in the 32nd over, the score read 233 for eight. Livermore and Robertson then added a further 30 runs to end their 35 overs on 263 for 9.

Once lunch had been consumed at the Tipsy Cow, Penguins emerged to defend a good total in brutally hot conditions. But it was the Cows who couldn’t take the heat as openers Bootsy and Ali Khan were back in the clubhouse within seven deliveries of the restart.

First, Bootsy found Swart at long-off, whose diving effort to catch seemed to have escaped him, but as with Thomas earlier, he was able to athletically gather on the second attempt, giving Robertson a first over wicket-maiden.

Khan followed just five balls later, bowled by Shivam Bhattacharya. Taking Hamilton’s wicket in the 7th over, Swart at mid-on showed his athleticism by diving to catch off a Dom Judge seam deliver, while Cows recoiled at a score line of 18 for 3.

However, an exceptional innings from Thomas in scoring a personal best of 41 and Fonseka posting 53, helped the Cows get ahead of the run rate at 138 for 4 by the 18-over drinks break.

Fonseka’s efforts had ended in the 16th over after a raised drive off Ledeboer’s first delivery was drilled to Dan Nicholson at cover to leave the Penguins’ player shocked again, and then elated in raising hopes of a victory by claiming the scalp of the Cows’ danger man.

But after Thomas was caught by Robertson in the 21st over off Livermore, the game was to turn again as Cows’ captain Joe Ninan and Sameer Khan worked a 91-run partnership to boost the score up to 236 for 5 in the 32nd over, before Khan fell victim to another superb diving catch by Swart off Judge’s bowling.

With three overs remaining, the game was finely balanced as Bhanu Pratap came and went for just five runs, being bowled by Robertson in the next over.

Having suffered an injury while fielding, Imtiyaz Mushtaq had missed most of the Cows’ fielding innings, but returned to help target the winning runs.

With Judge stemming the flow of runs from his final over with tight bowling, Swart was given the task of defending 14 runs from the game’s last over. But a six off the first ball certainly swung the odds back in the Cows’ favour.

Requiring 4 runs off the last ball, the Cows failed to deal with the pressure, ensuring a two-wicket victory for the Penguins as well as a 2-1 series win.