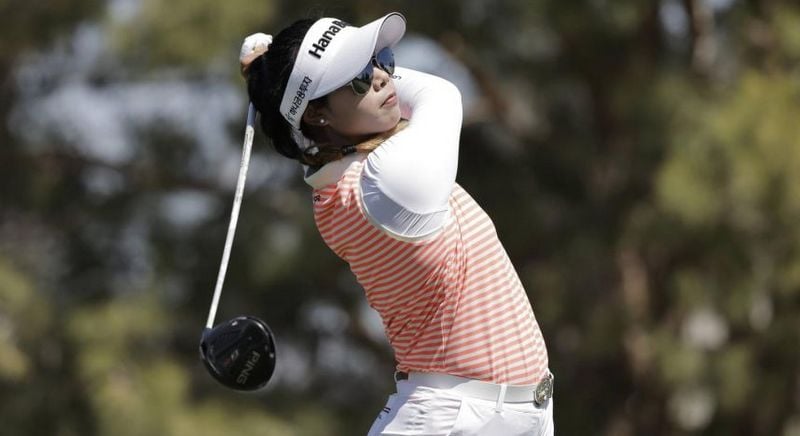 Patty Tavatanakit shot an 18-under total of 270 to win the ANA Inspiration yesterday. Photo: AFP.

Patty, 21, started the day with a five-shot lead and fired a four-under par 68 at Mission Hills in Rancho Mirage, California.

Her 18-under total of 270 put her two strokes in front of New Zealand’s former world number one Ko - who stormed from eight adrift with a sensational 10-under 62 for 272.

“I had no idea,” Patty said of Ko’s spectacular round, which matched the tournament record established by Mexican great Lorena Ochoa in the first round in 2006.

“I just played my own game, didn’t look at the leaderboard at all ... I just wanted to play my own game and I did - I did a really good job of that today.”

Patty, who played collegiate golf at the University of Southern California at Los Angeles, padded her overnight cushion with a chip-in eagle at the par-five second and picked up another stroke at the eighth.

She was unable to take advantage of the par-five 11th, but left herself less than two feet for a birdie at the 12th.

Ko, meanwhile, was surging up the board, picking up three shots in the first two holes with an opening birdie and an eagle at the second. Birdies followed at the fourth, sixth, seventh and ninth.

“I don’t think there wasn’t an exact moment where I felt like ‘Ok, this is going to be a good one,’” Ko said. “You just have to focus until that last putt drops on that last hole.”

The pace slowed somewhat on the back nine, where birdies at the 10th, 11th and 15th moved her within two strokes.

Ko, who counts two majors among her 15 LPGA victories couldn’t find another birdie in the last three holes and remains in search of her first victory since the 2018 Mediheal Championship.

Patty, still designated an LPGA rookie after the coronavirus pandemic disrupted her first season on tour, is the first rookie to win the ANA Inspiration since Juli Inkster in 1984.

She’s the fourth wire-to-wire winner, with no shared overnight leads, and the first since Australian Karrie Webb in 2000.