PHUKET: The chief of the Patong Municipality Sanitation Division has dismissed the notion that wastewater flowing into the bay is in any way contributing to the macro algae bloom along the Patong beachfront that has lead to masses of red sea urchins being stranded washed ashore.

patongSafetypollution
By The Phuket News 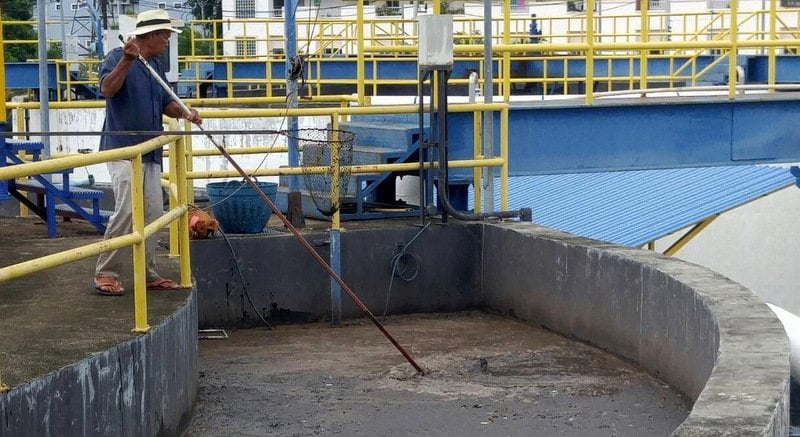 A staffer checks one of the tanks at the wastewater-treatment plant in Patong. Photo: The Phuket News / file

Marine life expert Dr Kongkiat Kittiwatanawong, Chief of the Phuket Marine Biological Centre (PMBC), which is operated by the Department of Marine and Coastal Resources (DMCR), on Monday pointed out that the sea urchins were being attracted to the shallow beach water in Patong by an ongoing bloom of “macro algae”.

“These algae are the food of the sea urchin. Algae thrive and are carried by the water currents, as well as sea urchins,” he explained.

“For algae to be able to bloom, it needs food like fertilizer we use to feed plants,” Dr Kongkiat said.

“I don’t see untreated wastewater released to the sea. All the wastewater has been treated before being released,” he said.

Mr nattawut also assured that wastewater released into the bay is tested regularly for higher concentrations of contaminants.

“After the COVID-19 pandemic began, only a small amount of wastewater has been sent to our treatment plant, as we have only a small number of tourists. much smaller than normal,” Mr Nattawut explained.

“As for many urchins being washed ashore, I have searched the internet to find out the cause of the phenomenon. The algae need nutrition, good weather and suitable sunlight to grow well.

“Right now, it is summer season, so there is good sunlight for the algae. For the nutrition, I believe that Patong Beach is on a closed bay which is full of food for algae. This is all my personal idea,” he said.

“However, I can confirm that the wastewater that we release has been treated and tested. The wastewater has passed all standard tests,” Mr Nattawut assured.

Asked again if he were certain that wastewater could not be a contributing factor in the ongoing algae bloom, Mr Nattawut said, “Yes. Maybe you have to ask the centre [the PMBC] again why they explained that way.”

Of note, Mr Nattawut would only explain the wastewater that is treated by the Patong Municipality WasteWater Plant.

He did not entertain the impact of wastewater from homes and businesses in Patong not connected to the municipality’s sewerage system flowing untreated into the bay.