PHUKET: The eighteenth round of the Patong Pool League (PPL) sponsored by Thailand Pool Tables and Genius 2 Garden and Restaurant was played Thursday, March 21. Mike is an experienced pool player and has been playing for various teams in PPL for many years. This season he is part of Kwans Birdie Team and hoping to win the PPL championship 2018-2019. 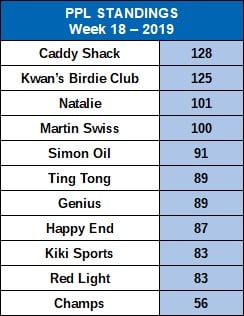 Natalie was playing away against Happy End. Natalie came with a very strong team to play against Happy End were short of players and were blessed to have Tommy Hansen as a guest player. Teacher TAK suffering from flu and high fever was called during the game to play as well because another player from the team could not make it. TAK played against Andrew B.D. who broke and played two different balls in the pockets and then cleaned up the table and as mentioned himself, 8balled the Teacher who wished he had stayed in bed at that very moment. Natalie was leading 5-4 before the beer leg and the Happy End team came back and won the beer leg in two sets, winning 6-5.

Caddy Shack played at home against Ting Tong on Wednesday evening. A customer from Birdy was afraid of a conspiracy that Caddy Shack players were to play for Simon and Oil against Birdie Team on Thursday. Some people just take this PPL a little bit too seriously. Don, Dr Ben, Young Man Trevor, Justin and Kingsley all playing for Caddy Shack won their singles and doubles games. Caddy Shack was leading 8-1 before the beer leg. However, Ting Tong really did not like to lose the beer leg in Paul’s absence so decided to win the beer leg in two sets but lost the match 8-3 to Caddy Shack.

Simon and Oil were playing at home against Kwans Birdie team. Goh, Mike and Se all playing for Kwan Birdie team won their singles and doubles games. The beer leg was a three-setter and won by Kwans Birdie Team who also won this evening with a 9-3 result and came one point closer to Caddy Shack who are still leading the league.

The nineteenth round of the Patong Pool League will be played on March 28.

People who are interested to play as well as visitors are all welcome to attend at one of the 11 participating bars. You can also visit the Patong Friendly Pool League Facebook page.