PHUKET: Patong Mayor Chalermluck Kebsap has announced that the Patong Countdown event, which each year attracts thousands of visitors to usher in the New Year with a mass beach party, has been cancelled.

tourismhealthCOVID-19Coronaviruspatong
By The Phuket News 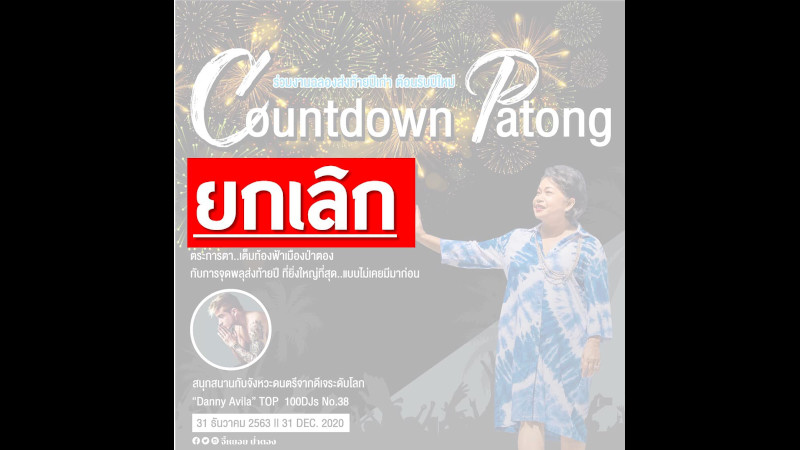 The Countdown Patong 2021 event to celebrate the New Year has been cancelled.

The event, this year branded “Countdown Patong 2021”, was cancelled “For the safety of the Patong brothers”, Mayor Chalermluck announced this morning (Dec 23).

“Take care of yourself, Maintain a distance, Always wash your hands, Wear a mask all the time,” she added.

The event each year brings major DJs to perform live at a mass dance party on Patong Beach. This year renowned DJ Danny Avila was to play on New Year’s Eve.

The cancellation follows Phuket Provincial Health Office (PPHO) Chief Thanit Sermkaew calling for all large-scale events planned to be held to celebrate the New Year to be postponed as a health precaution amid the current COVID-19 outbreak emanating from Samut Sakhon, on the outskirts of Bangkok.

The cancellation also follows growing sentiment from major business figures in the town, including Preechavude ‘Prab’ Keesin, to cancel the event as a precaution to prevent the possibility of a COVID-19 outbreak on Phuket.