PHUKET: More than 150 people turned out to support the Patong Bay Hill Hotel yesterday (Apr 25) following the nightlife venue at the hotel being ordered to close for 15 days for breach of the Hotel Act for late trading.

patongtourismpoliceCOVID-19
By The Phuket News 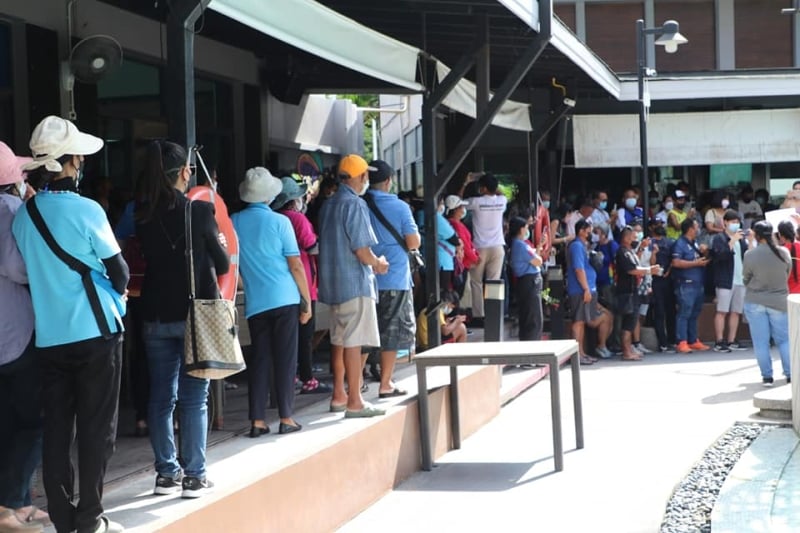 The hotel operator has yet to be handed down punishment for breaching COVID regulations and making excessive noise.

The order to close was issued, and came into effect, last Friday (Apr 22).

The hotel came under scrutiny after lawyer Sittra Biabangkerd posted a video clip on his Facebook page on Apr 16, forcing local officials to take action, despite the fact that the hotel venue regularly holding entertainment events late into tyhe night was commonly known throughout Patong.

The gathering yesterday brought flowers and held up placards bearing messages in support of hotel owner Preechavude ‘Prab’ Keesin, who has openly defended the move to have the venue operate as a means of providing much-needed incomes to people in the town.

Mr Preechavude addressed the gathering yesterday by video call, as he was in Bangkok to help drive support for improving Phuket’s tourism situation.

He thanked those present for their support. “As a child of Patong, I am ready to keep fighting,” he said.

Mr Preechavude assigned Pakarat Tamchu, Chairman of the Patong Development Foundation, a charity organisation that Mr Preechavude founded, to receive the bouquets of flowers on his behalf.

However, Mr Weerawit also pointed out that entertainment operators had lobbied the government for 20 years to extend the trading hours for entertainment venues in Patong to cater to tourists. Many tourists do not venture out to enjoy the nightlife until after 10pm, he said.

“We will continue to submit the proposal ‒ again ‒ even though after all these years there has been no change. Operators will continue to do it, but it will still be considered illegal,” he said, alluding to how local law enforcement tends to choose to allow the practice to continue at some venues at some times, but not others.

“I don’t want to look at just extending the trading hours. It is about more than that. I also want to look at, if it [the changes] is done right, it will generate income and employment,” he said.

“It’s no different from saying that you don’t want to have casinos, but there are a lot of casinos open and operating. Is it just a channel for certain people in particular?” he posed.