PHUKET: A new tiger tourist attraction in Phuket simply called Tiger Park, slated to open by the end of this month, is already under fire from animal welfare groups for offering yet another option for tourists to have their photos taken with the majestic animals.

tourismanimals
By The Phuket News 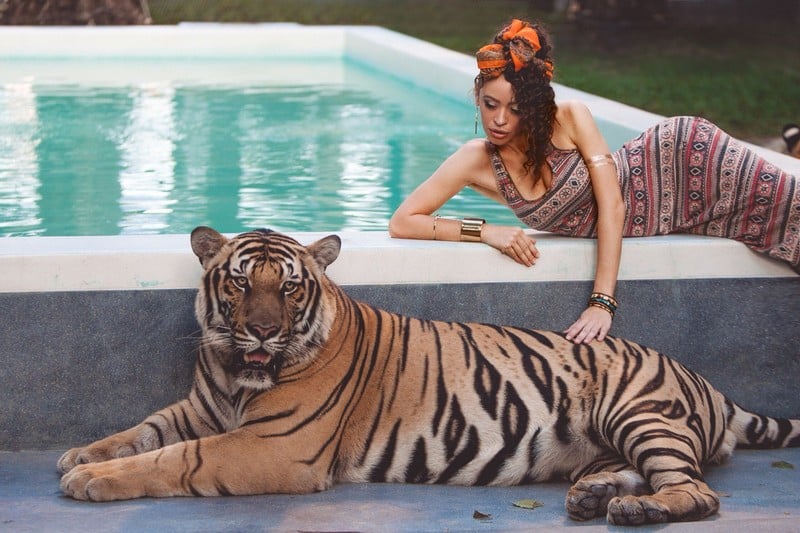 Yet, Tippawan Prathummanee, General Manager of Tiger Park Phuket, which operates under Navaphol Big Tiger Co Ltd, the operator of Tiger Park Pattaya, defends the new park’s form of operations. The park does not raise tigers to sell or to exchange for other wildlife animals.

“Our goal is to ensure that all of our tigers live in natural environments that make them feel safe… You can feel, touch, hug and take photos with tigers without chains or drug control,” Ms Tippawan said.

There will be 29 tigers at the park, including cubs, and female and male adult tigers, ranging from two months to 10 years old. All of the tigers to be featured at the new park will come from Tiger Park Pattaya.

“We have had much experience with tigers in Pattaya. We are well educated about tiger behaviours and how to take care of them,” Ms Tippawan assured.

“We also have certified veterinarians on site to look after the tigers, as required by law, and the tigers will be fed fresh chickens from farms that use low hormones. We never use drugs to make tigers docile, we only give them medicines for treatment, and newborn cubs stay with their mothers,” she added.

The main target markets of visitors for the park, located on about 14 rai in Soi Yodsane 1 near the entrance to the Big Buddha viewpoint, are Chinese, Indian and Russian tourists.

“We are nearly ready for a ‘pre-opening’ in time for Chinese New Year. Once fully open, we expect about 5,000 visitors a week,” Ms Tippawan explained.

The park will be open daily from 9am to 6pm, but the entry prices have not yet been finalised, she added.

Ms Tippawan admitted that Navaphol Big Tiger Co Ltd, as the operator of Tiger Park Pattaya, was initially involved in the operation of Tiger Kingdom in Phuket.

“But Tiger Kingdom in Chiang Mai and Phuket were later separated from our operations and are not under Navaphol Big Tiger Co Ltd anymore,” she said.

Ms Tippawan declined to explain the details of the separation or explain what role Navaphol Big Tiger played in the set up and operation of Tiger Kingdom.

“Presently Navaphol Big Tiger Co Ltd is not involved with Tiger Kingdom in Chiang Mai and Phuket.” she repeated.

“I understand that there are a lot of different thoughts about tigers, but our main purpose is to conserve tigers in Thailand. Tiger Park in Pattaya has been open for more than 20 years, so we have demonstrated that we pay much attention to tigers’ lives and health in our park.

Ms Tippawan argues that keeping tigers in captivity is much better than the current alternatives.

“The enclosures at the new Tiger Park will emulate the tropical jungle, which I believe is safer than the forests in Thailand – as we have seen with the case of the panther [being poached] last year,” she said.

“Worse, there are people who still like to collect organs and other parts of tigers because they believe they are sacred, so the demand for tiger’s fangs, bones, claws and fur is still high. Tigers are much better off being cared in the park until the forest is safe enough.

“At the park the tigers will be surrounded with trees, so that they can rest in the shade. They will also be able to enjoy swimming in a pool. Keeping them here until it is safe for them to be returned to Thai forests is a lot safer, and we have lots of tropical trees, swimming pools, man-made rivers, barriers and proper shelters for them,” Ms Tippawan added.

“When it is safe for tigers to remain in national forests, at that time we will be willing to let them go back to the real jungle,” she said.

“Phuket is full of tourists and expats. This is a good way for people to see tigers, and in return the tigers are fed healthy food, get medical treatment and stay in a good environment,” she added

Comments online have already gained momentum against the opening of the new park, saying “This is disgraceful. I definitely won’t be travelling to Thailand anytime soon!” and “It is very frustrating seeing this kind of tiger hell expanding all over Thailand. Certainly bad for animal welfare and conservation. Hope tourists won’t support it”

One comment noted, “This is very sad… such a shame there are still so many people that are ignorant or willing to believe this contributes to conservation somehow.”

John Dalley, co-founder of respected animal welfare Soi Dog Foundation, based in Phuket, told The Phuket News, “Tiger Park like other similar attractions exists for one purpose only. To make money from tourists. Wildlife is exploited widely in Phuket and the other tourist destinations in Thailand. The draw is obvious. The chances of seeing these magnificent animals are slim.

“As Ms Tippawan states, it is aimed at Asian and Russian tourists. Most Western tourists now thankfully shun such places, understanding the cruelty involved, whether it be elephants, tigers or dolphins and most zoos.

“Tigers will breed readily, supplying the constant demand for cubs, essential for the tourist experience. What happens when there are too many grown tigers to be accommodated on the site?”

Mr Dalley pointed out that for years the infamous Tiger Temple in Kanchanaburi catered to tourists before it was exposed that they were dealing in tiger parts. When it was closed over 40 recently killed cubs were found in a freezer there.

“Tigers that could not be fully trusted spend their lives in cages and are used only for breeding,” he noted.