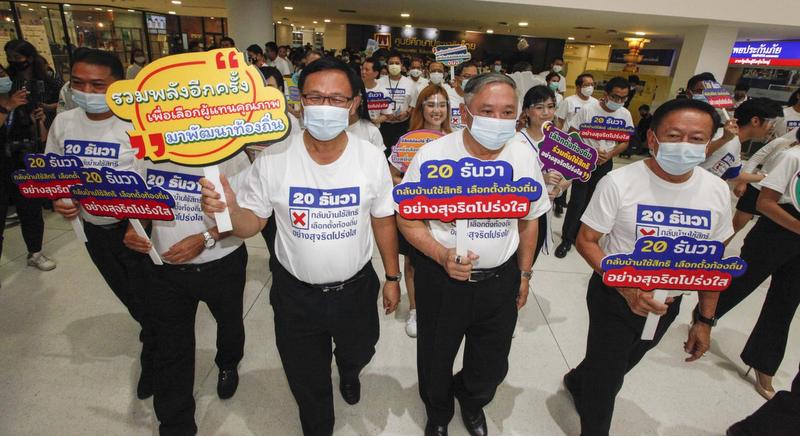 The elections will take place on Sunday across 76 provinces, with the positions of PAO presidents and members up for grabs.

It will be the first time since the May 2014 military coup engineered by the National Council for Peace and Order (NCPO) that local polls have been held. The council halted them out of concerns they might incite unrest.

Young voters were highly influential at the general election in March last year, when many of them swept the now-defunct Future Forward Party to power. The new-look FFP won 80 MPs and clinched its place as the third-largest party in parliament.

Some believe young voters could hold sway again on Sunday, with the Election Commission forecasting a turnout of as much as 70-75%.

The younger generation can be counted upon to dismantle what critics say is the longstanding dominance of political dynasties in several constituencies and provinces.

Capitalising on the young voters is the Progressive Movement co-founded by former FFP leader Thanathorn Juangroongruangkit. His group, which is vying for PAO chairman and contesting member seats in 42 provinces, has lobbied hard for changes. Mr Thanathorn has himself hit the campaign trail regularly to help the group’s local campaigners.

However, the PAO poll may not be the magnet to voters that many expect.

The government and EC are doing little to encourage voters to vote, despite the long seven-year absence, said Veerasak Kreuthep, an expert in power decentralisation at Chulalongkorn University.

The reason for this, he said, is the poll is ill-timed, having been organised too close to the New Year. Voters will have returned home for the holidays and will be reluctant to spend time and money travelling just to vote in the local elections.

Also, the PAOs are viewed as conducting business that is remote from people’s everyday lives.

Mr Veerasak said a weak turnout might play into the government’s hands because the tailwinds for change may stop blowing if fewer youngsters take part. “Setting the PAO poll for Dec 20 might have been part of the government’s tactic all along,” he said.

The major parties, meanwhile, have been distracted by infighting over which candidates to field. The Democrat Party, for example, is reportedly connected to two political groups who have sent candidates to compete in 3-4 provinces in the South.

In Chiang Mai, the main opposition Pheu Thai Party is locked in a bitter conflict with Jatuporn Promphan, chairman of its traditional ally, the red-shirt United Front for Democracy against Dictatorship (UDD).

Mr Jatuporn accuses Pheu Thai of unfairly excluding its desired candidate from the race there.

He says the party abandoned Boonlert Buranupakorn, leader of the Chiang Mai Khunnatham group, falsely accusing him of siding with the rival ruling Palang Pracharath Party.

He alleges that Mr Boonlert was sidelined by Yaowapa Wongsawat, a prominent figure in Pheu Thai, who is the wife of a former prime minister, Somchai Wongsawat, and the sister of two others, Thaksin and Yingluck Shinawatra.

The rift in the Chiang Mai PAO race is highly indicative of a weakening of the old clique, a reference to Pheu Thai, which could suffer losses on Sunday.

Mr Veerasak said the PAO elections are not linked to national politics and may be impervious to the anti-government protests engineered by the Ratsadon group, which is followed by many young people targeted by the Progressive Movement in the PAO poll.

He expected the Progressive Movement, which has called for reform of the PAOs and a bottom-up, participatory approach in the way they operate, to pick up 1-2 PAO chairman seats on Sunday, its PAO debut.

“That would be quite an achievement for the group,” he said.

Orathai Kokpol, secretary-general of King Prajadhipok’s Institute, also anticipated a low voter turnout on Sunday, saying that young voters, while grasping the general notion of democracy, might struggle to understand what PAO chairmen are supposed to do.

Ms Orathai said 30% of former PAO chairmen would be seeking re-election and it would be fascinating to see if they succeeded, especially in “monopoly” provinces such as Chon Buri and Samut Prakan.

The upside of the poll this time is that candidates have been promising proactive developmental projects.

Sadly, however, these are costly and may be unaffordable.